Rennicks explains to Highways how 10 years from now we will see the broadening of a new dawn in the world of road transport and traffic management. But how will it all be powered you ask?

Highway authorities around the world are pushing the green agenda and with it comes pressure to limit or reduce the installation of power cables adjacent to new or existing highways. These authorities are also deploying technology to collect increasing amounts of data to plan road and bridge maintenance, optimise traffic movement and improve road safety. They employ devices such as traffic counters, vehicle weighing units, vibration sensors, Road Side Units (RSUs), and CCTV.

The world’s first photovoltaic (PV) highway located in Jinan, in east China’s Shandong province opened for traffic in December, 2017. The ring road has a section just a little over a mile long. This road consists of three layers – the bottom layer is a layer providing insulation to prevent moisture from getting to the photovoltaic devices in the middle layer, with the top layer providing protection in the form of transparent concrete. The PV panels, which look like large pieces of glass, have been designed to accommodate mid-sized vans.

The roads are designed to provide power to vehicles passing over them and provide information wirelessly to autonomous vehicles, which will use the road.

While it is an experiment, the cost at $458 per square yard is almost 100 times more expensive than traditional asphalt road.

Will it become more economically viable? Of course, but it will take time. It may be decades before near cost parity is achieved with traditional roads, and even then, it is difficult to imagine a roll-out on the scale required to transform the millions of miles of road networks globally.

In the interim, where there is no grid, smaller independent standalone power supplies which can provide power quickly and efficiently are becoming more prevalent. They cannot claim to generate enough power to pass through to exposure values (EVs) but with power consumption for small, low voltage devices reducing significantly with passing time, these independent standalone power supplies are now finding a niche which is more valuable than the traditional provision of off-grid street lighting. 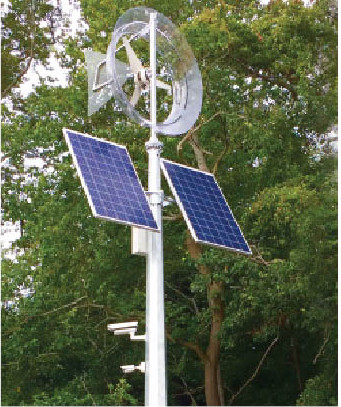 One such system is Rennicks’ Off-Grid Power Solution (OGPS). It is a hybrid wind and solar system with a built-in rechargeable energy source. It is a robust, certified (UL and CE listed mark) off-grid power platform. It uses leading edge technology combined in an integrated system which offers 24/7 power at different levels (40/80/120W) continuously. It has been designed to address the problems which are encountered by highway and law enforcement authorities and is installed at locations in the UK, Germany, the USA and Ireland. In most jurisdictions, it requires no planning permit and can be deployed in less than four hours.

It will act as a power provider and enabler for the network of sensory equipment required for the roll-out of autonomous driving and connected vehicles. It has integrated 2G/3G/4G on board communications and also offers connectivity through Zigbee.

‘It is multi-functional. You are only limited by your imagination. It can run anything off the pole – CCTV surveillance, ANPR cameras, street lighting, wi-fi – even a weather station.

‘In terms of output, you could run a street light, three cameras, wi-fi and a weather station without much trouble. There is no other off grid power solution available that can give assurances on power to the extent Rennicks can with this solution. It is a step-change in solar and wind technology.’

During early 2019, the unit will be paired with some of the latest RSU technologies, which have been developed to provide speed warnings, collision warnings at intersections and dangerous junctions, road object warnings – direct in lane, peripheral, and overhead, and changing road/bridge conditions.

The synergies between the OGPS and RSUs are strong, with the OGPS providing power to facilitate its deployment on highways and roads which otherwise would not have been possible.

Rennicks will be exhibiting at Traffex 2019, 2-4 April at the NEC Birmingham