Sturgeon's A9 commitment rooted in the present

First minister Nicola Sturgeon has declined to provide an assurance that her Scottish National Party Government will not abandon the £3bn A9 project as part of a deal with the Green Party.

Last week at First Minister’s Questions, Ms Sturgeon was asked by Conservative MSP Murdo Fraser whether she would assure MSPs that any deal would not ‘jeopardise that vital road safety project’.

In response, she accused Mr Fraser of ‘trying to stir up concerns’, adding: ‘This Government’s commitment to upgrading the A9 is clear; that commitment continues.’

She did not however provide the assurance he had sought that the commitment would not change in the future. 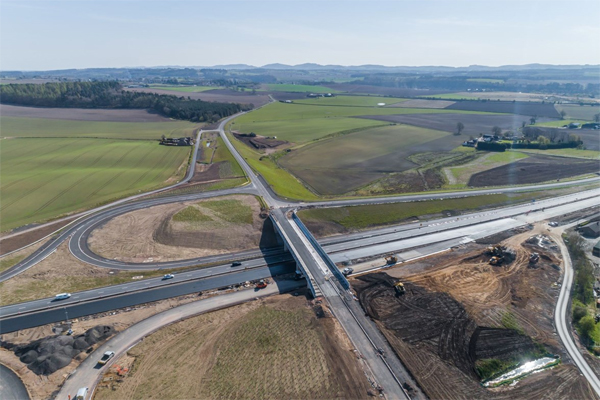 A day earlier Transport Scotland had issued a press release announcing that the new Stanley/Tullybelton Junction and overbridge on the Luncarty to Pass of Birnam section of the A9 Dualling project will come into operation for the first time as part of a new traffic management layout implemented from 8 June.

It said the new junction, the largest structure of the project, will provide improved safety for traffic joining and leaving the A9 carriageways with the creation of new north and southbound slip roads.

The junction has removed right turn manoeuvres from the A9 carriageway, enhanced visibility for road users, and improved access to the communities of Stanley and Tullybelton as well as routes to neighbouring properties and businesses, Transport Scotland said.

It added that the junction has been under construction for more than two years and has involved 268 tonnes of reinforcement steel, 1,550 cubic metres of structural concrete, 15 precast concrete beams and approximately 500,000 cubic metres of earthworks.

Gemma Patterson, project sponsor for Transport Scotland, said: ‘The project team has overcome unprecedented challenges during this last year and I’m extremely proud to see the progress that has been made to date.

‘I’m delighted to see this new junction coming into operation and the start of benefits to road users that this new infrastructure will bring to the local communities.’

Balfour Beatty’s contract manager, Alan Brisbane, added: ‘This significant milestone is the culmination of a great deal of hard work and planning and will deliver a lasting legacy for surrounding communities, businesses and road users.

‘This next traffic management phase signals a move to the last phases of construction and the final push for project completion in winter 2021.’

Aside from the Kincraig to Dalraddy section, which opened to traffic in 2017, the Luncarty to Pass of Birnam section of the A9 project is the only section that is not currently ‘in preparation’.