West Sussex is carrying on, so you don't have to

Latest traffic volume statistics have prompted West Sussex County Council to plead for motorists to only travel if absolutely essential.

Traffic counters in the county last week showed a 21% increase on the previous week. 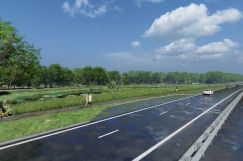 Roger Elkins, cabinet member for highways and infrastructure, said: 'I would appeal to residents to remember the travel restrictions are crucial in the fight against Coronavirus spreading – please adhere to the Government’s message and only travel if absolutely necessary.'

The most significant roads project in a generation

The news comes as work is set to start on a £23m road-building project in the county, which will support the provision of new homes and jobs.

The A2300 improvements scheme in Burgess Hill will widen around 2.5km of single-lane road to dual carriageway and support the provision of more than 3,500 new homes and 3,600 new jobs.

The project will also provide new facilities for pedestrians and cyclists.

Mr Elkins said: 'This is arguably the most significant road-building project for the county council since the A24 Ashington Bypass was built in the 1990s.'

Steve Horton, regional director for contractor Jackson Civil Engineering, said: 'We are looking forward to working closely with West Sussex County Council on this key infrastructure project to improve the journeys for local communities and businesses in the region.

'The safety of both our workforce and the public is always our top priority and works will be carried out in line with the current Government guidance on COVID-19. Construction of this nature will involve some disruption for the public but we will work with the county council’s project team to try to minimise this as much as possible.'

The project was jointly funded by central government through the Coast to Capital Local Enterprise Partnership Local Growth Deal, developer contributions and the county council.

It will involve building a two-lane new carriageway immediately north of the existing road - which will become the new eastbound carriageway.