Greater Manchester mayor Andy Burnham has floated the idea of a high occupancy vehicle lane as part of a ‘Congestion Deal’.

Transport for Greater Manchester (TfGM) said the ‘deal’ is a new approach to tackling congestion, where public bodies and operators are challenged to offer people more choice in their travel options - and employers, residents and commuters are incentivised to change their travel behaviour. 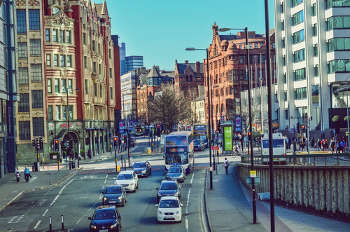 Mr Burnham said: ‘Congestion is a serious problem in Greater Manchester, which affects people’s health and wellbeing, as well as access to employment and education opportunities.

‘Every week, my Twitter feed and inbox are filled with accounts of the difficulties people experience in travelling to work, dropping the kids off at school or getting to appointments on time. There’s no quick fix or single solution to tackling congestion and it requires a long term approach, but there are things we could be doing better.

‘So I’d like all of Greater Manchester to agree to a congestion deal; transport bodies and businesses will work together to give people real choice about their travel options; whilst Greater Manchester residents must also play their part in the deal by making changes to how and when they travel and by choosing public transport, cycling or walking as an alternative to the car where possible.’

Chris Boardman, Greater Manchester's cycling and walking commissioner, said: ‘Making it easier for more people to travel without using cars, particularly for short journeys, is one of the key ways we can tackle congestion. We can only do this if we make active travel the easiest, most attractive and logical option.'

The new measures include:

The Congestion Deal follows Mr Burnham’s ‘Congestion Conversation’ last autumn and has been developed by TfGM, alongside a group of independent experts, with Greater Manchester’s 10 local highways authorities.

The Greater Manchester Clean Air Plan, due to be published later this year, will also incorporate the Congestion Deal.