Amey has appointed Amanda Fisher as acting CEO after showing the door to incumbent Andy Milner.

In a statement, the firm said Mr Milner was leaving ‘after a long career and almost four years in the role of chief executive’ but gave no explanation for his departure. 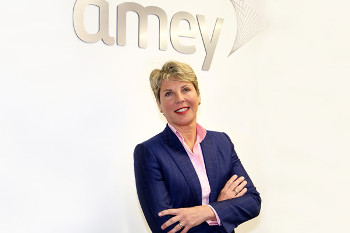 Ms Fisher steps up from her role as managing director of the Amey’s Facilities Management, Defence and Justice business.

Fidel López Soria, CEO of Ferrovial Services, which owns Amey, said: ‘Through her extraordinary results since joining Amey, Amanda has demonstrated her undoubted ability to assume the position of chief executive. I want to wish her all the best for the new challenges she faces.’

He added: ‘I would like to thank Andy for his dedication and commitment throughout his career in Amey and Ferrovial, and particularly for navigating the business through some very challenging years within our sector.

‘He has helped to create a strong platform for the future, and I wish him every success for his new professional endeavours.’

Ms Fisher said: ‘I am delighted to have been offered the role to lead Amey through what is both an exciting but demanding time for our industry.

'Recently the business has overcome many challenges, and my focus will be on ensuring we build on this, readying ourselves for the next phase, delivering what our clients and the communities we serve need.’

Ms Fisher joined Amey in 2017. Before that she was managing director at Balfour Beatty Living Places, the firm’s local authority highways maintenance arm. She previously worked in facilities management after leaving the armed forces, where she was a commissioned officer.

Amey is currently up for sale along with Ferrovial’s worldwide services businesses. Last week Amey was reported to have put its environment and waste and utilities businesses up for sale.