The winners of this year’s Highways Awards were revealed on Wednesday evening in front of nearly 500 industry professionals at the Lancaster London.

A total of 14 winners, from organisations across the UK, received their awards from TV and radio presenter Colin Murray (left of picture) and the sponsors of each award.

Adrian Tatum, director of events for the Highways Awards, said: ‘This year, for each Highways Award winner, we received at least 15 other impressive entries bursting with innovation.

'This reflects a phenomenal period of an industry always seeking new and better ways to make the UK’s road network safer, greener, and better-maintained.

‘There are also clear benefits of public sector funding and private sector innovation coming together. Congratulations to all this year’s winners and our thanks to the sponsors of these coveted awards.’

Most Innovative Highway Authority Scheme of the Year

Judges’ comment: 'The winning entry is a good example of collaboration across a wide range of organisations alongside the work on this project towards ‘future proofing’ for the next phases in years to come.'

Judges’ Comment: 'Kier Highways have sensitively dealt with an increasingly important health and safety issue, in a way that delivers a very honest approach to a very timely topic.'

Road Safety Scheme of the Year

Judges’ comment: 'The success of this scheme was underpinned by collaborative working that involved designers, contractors and the main stakeholders which included Transport Scotland, Scottish Boarders Council, NHS Boarders, The Scottish Ambulance Service and Police Scotland.'

Environmental Sustainability in the Highways Sector

Judges’ comment: 'We were impressed with this innovative wildlife habitat connectivity scheme which has broken down barriers caused by differing transport corridors on the strategic road network.'

Road Marking Project of the Year

Judges’ comment: 'Despite all entries being of high quality this year, the winning project demonstrated in-depth research to ensure a consistently high level of performance of both road markings and studs, especially in poor weather conditions.'

Judges’ comment: 'Drawing on best practice from around the world, this project has successfully linked three areas of the city with the city centre providing people with better access to jobs, hospitals, shops, education and entertainment.'

Highway Industry Product of the Year

Judges’ comment: 'Roadworks A Customer View (RACV) toolkit brings together a number of customer focused initiatives that have been deployed during various projects and schemes on the network already demonstrating proven tangible results since its launch.'

Team of the Year

Judges’ comment: 'This project, involving A one + and Highways England, is a good example of a real team approach to an extremely challenging project in a difficult area to work.'

Judges’ comment: 'This project, delivered by the EMAD Community-which includes Highways England and 22 other partners, isan excellent example of embracing the new asset delivery type contract and at the same time using customers’ feedback in a positive way.'

Judges’ comment: 'Collaborative working in this project over three original highway and utility schemes ensured work was completed in one phases, sharing traffic management and improved working techniques contributed to a saving of 98 days of road disruption.'

Best Use of New Technology in the Highways Sector (pictured) 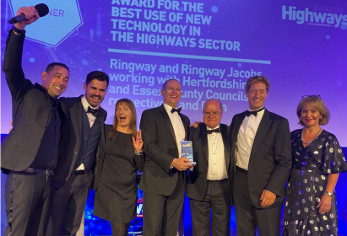 Apprentice of the Year

Judges’ comment: 'Peter Lees has proven to be an inspirational role model for other apprentices and a real advocate for anyone, at any age who wants to change the direction of their careers in the sector.'

Judges’ comment: 'The East Midlands Asset Delivery contract is the first of the new style Highways England contracts to be implemented in the UK. Comprising 22 different organisations, the project has clearly demonstrated vast improvements in collaborative working.'

The Highways Awards are independently judged by a panel of representatives from across the UK, including the Department for Transport, Transport Scotland, the Welsh Government, Transport NI Eastern Division, Highways England, ADEPT, the Road Safety Foundation and the Institute of Highway Engineers.

The charity partner for the gala evening dinner was construction industry charity, the Lighthouse Club, and donations raised during the evening received by the charity’s chief executive, Bill Hill.