The first in a series of new style contracts to carry out up to £8.7bn of work on the strategic road network have been signed.

The deals have been set up using the Routes to Market Regional Delivery Partnership, which Highways England says incentivises companies to improve safety and journeys.

The Government-owned company has signed a £61.4m contract with ‘supply chain partner’ Geoffrey Osborne Ltd to deliver a major upgrade on a bottleneck on the A46 in Coventry, while a £52.4m contract was has been awarded to VolkerFitzpatrick to deliver a series of improvements along the A27 near Lewes in East Sussex.

It said the contracts signed are the first under a new ‘industry-leading approach’ it announced last year, involving deals with 13 supply chain partners.

The 13 companies – known as Delivery Integration Partners (DIP) – are working on 18 packages of schemes, including the A46 and A27 projects.

Highways England major projects executive director, Peter Mumford, said: ‘I am delighted to announce the signing of these contracts, which mark the first of many more to come as part of the Regional Delivery Partnership.

‘These are the first of 13 companies that will be working with us to deliver these important road projects, safely, with our customers in mind and to the delivery plan. To achieve this we have worked hard to create alignment between Highways England and its supply chain, focusing on the behaviours that support us to achieve our shared goals.'

He added: ‘This is clear evidence that new ways of working are being embraced by the market, which is now seizing the opportunity to work in a more collaborative way with Highways England, representing a fundamental change in the way we deliver our road projects.’ 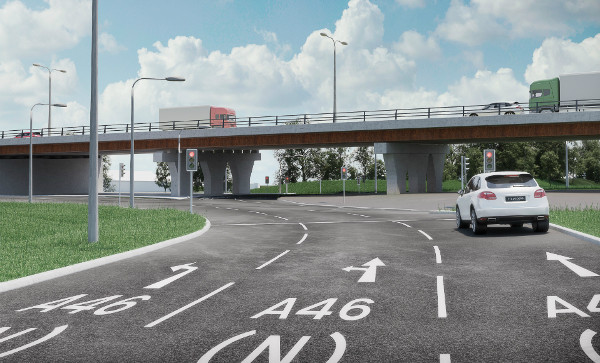 Highways England is developing a scheme to improve the junctions along the A46, which includes the Binley (pictured) and Walsgrave junctions.

The upgrade is taking a phased approach and will progress with Binley junction (also known as the TGI Island) first, as it currently suffers from heavy congestion. The plans for the Binley junction will see the A46 dual carriageway become a flyover that will separate local traffic from using the A46.

Jamie Harrison, highways director at Geoffrey Osborne Ltd, said: ‘We are delighted to have signed the contract and look forward to embarking with our partners, Highways England, on the A46 Coventry Junctions upgrade scheme at Binley.

‘Being such an important strategic scheme for the Highways England network, we look forward to helping our partners make a success of the DIP framework.'

On the A27 junctions will be upgraded along a nine-mile section of the A27 between Lewes and Polegate, creating a new dual carriageway on a short section west of Polegate, with enhanced walking and cycling facilities along the whole stretch.

Stuart Ayres, VolkerFitzpatrick’s framework partnership director for the DIP Framework, said: ‘Following our appointment to the Delivery Integration Partnership Framework in November of last year, we are now delighted to have signed the first scheme contract for the A27 East of Lewes improvement works.

'This marks the start of a new collaborative approach to strategic delivery on the roads network and continues the strong working relationship between VolkerFitzpatrick and Highways England.’

a27 A46 regional delivery partnerships