Highways England is trialling an inflatable barrier that can be put up in minutes to help protect road workers on its network from motorists who drive into work areas.

The government-owned company said the ‘large, bright and very visible’ airbag sends a clear message to drivers but can also be put in place in under 10 minutes. 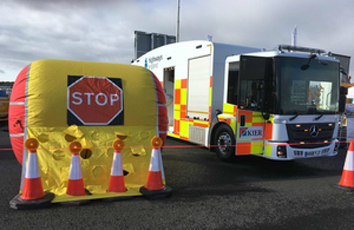 Innovation manager Lisa Maric said: ‘On average, our road workers report nearly 300 incidents of vehicle incursions and abuse every week. It is a far too frequent hazard for our workforce going about their daily job – and the consequences could be fatal.

‘We are committed to keeping our workforce safe and doing all we can to ensure no-one is harmed when travelling or working on our network. We are also committed to investing in new innovations to help improve safety for road workers and users.

‘We hope these airbags will go some way to protecting our workers but also help change drivers’ behaviours. We ask drivers to respect our road workers, to slow down near works and obey speed limits and signs.’

The trial is being carried out with Kier and will initially use the barrier on a slip road at the A45/A46 Stivichall interchange in Coventry during roadworks later this month.

Highways England said vehicles are often driven into work sites on slip roads as drivers try to exit but the inflatable barrier should act a deterrent.

In the initial trial the barrier will be installed as part of a weekend junction and slip road closure, but it is anticipated that the airbag will be tested within various types of temporary traffic management scenarios over the coming months.

The £95,700 cost of the airbags trial was met through the Designated Funds programme. Highways England had a £150m ring-fenced fund to support innovation a part of the first (2015-2020) Road Investment Strategy.