Kier Highways is trialling a hydrogen-powered fuel cell for a generator at its site for the A585 Windy Harbour to Skippool scheme.

The project, in collaboration with UK start-up Hydrologiq aims to explore the practical challenges of replacing diesel with hydrogen and is the first hydrogen 110kVA generator deployment undertaken by Kier Highways.

Hydrologiq specialises in off-grid hydrogen through connecting end users with their network of hydrogen fuel and hardware suppliers. In late 2021, it secured a grant from the Department of Business, Energy and Industrial Strategy to deploy hydrogen generators on real-world sites throughout the UK. 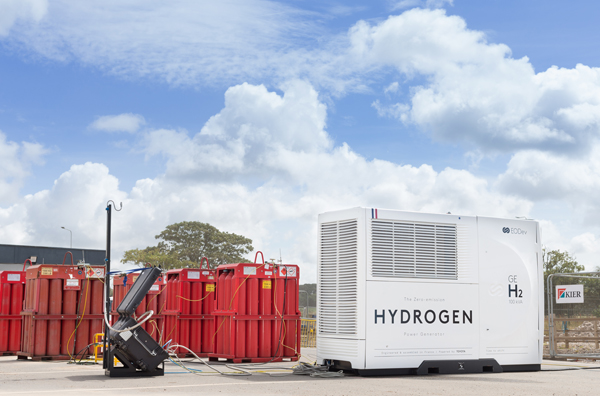 Matt Tompsett, head of environment and sustainability at Kier Highways, said the firm currently sees hydrogen as the most viable solution to decarbonising not just generators, but also larger fleet and plant, although it is transitioning its small fleet and plant to electric.

He said: 'There is no silver bullet to this issue and there won’t be one alternative fuel solution.

‘The trial of this hydrogen generator is an important step on this journey, helping the proof of concept, expelling myths, and engaging our employees who will use the new equipment and technology.’

Benjamin Lindley, director at Hydrologiq, said: ‘Currently there are many challenges to overcome when deploying a hydrogen-powered generator on an active project.

‘I'd like to thank our supplier partners and everyone on the Hydrologiq team who worked on compliance, logistics, and commissioning to facilitate Kier's access to this new and complex technology.’

The Kier Group Sustainability Framework sets out a target of net-zero across operations by 2045 and Kier Highways has committed to achieve net zero scope 1 and scope 2 emissions by 2030.