With public sentiment firmly behind the 'no more potholes' agenda, and close to half the public suggesting the roads have reached crisis point, Mark Morrell, AKA Mr Pothole, took the fight to Westminster...in a bright orange tank. 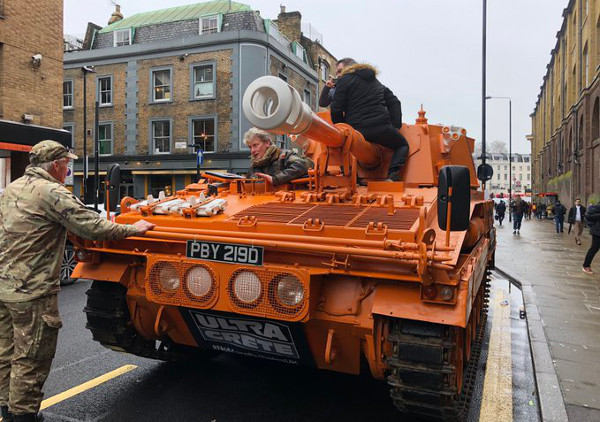 Speaking to Highways, before driving off to Parliament Square, Mr Morrell said: 'Today is about taking the fight to government for extra investment far and above what they currently do. We need another £1.5bn invested in a re-surfacing programme.'

The ALARM 2019 survey reported that local authorities need £9.8bn to bring the network up to scratch.

The Asphalt Industry Alliance (AIA), which runs the survey of local authorities in England and Wales, highlights that 'all the work cannot be carried out at the same time and parts of the network will continue to deteriorate in the meantime - this is why a sustained 10-year period of an additional £1.5 billion investment is needed'.

AIA chair Rick Green said: 'Over £1bn has been spent on chasing and filling potholes over the last decade – what a waste. What’s needed is an investment in effective road maintenance, which will improve the condition of our roads and help prevent potholes from forming in the first place.

'It’s promising that the new Government has recognised the need to ramp up spending on infrastructure in general, but this must include properly funding the maintenance of existing transport networks, such as our vital local roads, just as much as on headline-grabbing new schemes.

'We’ve been calling for £1.5bn extra per year for the next 10 years to bring local road conditions up to a level from which they can be maintained cost-effectively going forward.'

The AIA is a partnership between the Mineral Products Association (MPA) and Eurobitume UK.

Are we in crisis?

In the shock poll, 42% agreed with the statement: ‘I think we have a crisis in the state of repair of roads in the UK’, which goes up to 50% in the East of England and a low of 32% in London.

And when asked if they think ‘the bad conditions of roads in the UK constitutes a national emergency (e.g potholes, cracks, poor drainage etc.)’ 31% of the UK population agreed with this view, with a high of 36% in the West Midlands and a low of 24% in London.

Previous Re-flow research with the highways sector itself found that, aside from more funding, utilising better project management methods, better scheduling of projects and improvements in construction methods were seen as the top ways to tackle the pothole plague.

Mike Saunders, managing director of Re-flow said: 'The challenges being faced by the industry in terms of being more innovative with the design, construction and maintenance of the network are ever-present, so those working in the sector must come up with new ways to do more to make the most of the funding they receive, as a sustained lack of investment is set to continue in the foreseeable future.

'The current system of trying to keep on top of patching up the potholes instead of investing in proper resurfacing is making roadworkers more like firefighters.'