One in four roadworkers suffer mental health issues after abuse

One in four roadworkers in Scotland has suffered mental health issues following verbal or physical abuse from the public, according to new figures.

A survey of Scotland’s trunk road maintenance companies, including Amey, BEAR Connect and Autolink, has revealed some of the challenges faced by staff while doing their jobs.

Now the Scottish Government is joining industry to help raise awareness of the issue. The trunk road maintenance companies, with the support of Transport Scotland, have committed to taking a zero tolerance approach in response to any further threats to their employees.

Among the worrying findings, the survey revealed: 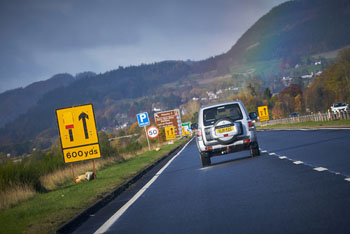 Minster for transport Graeme Dey said: 'The abuse of our roadworkers is completely unacceptable and the results of the survey show just how big a problem it is.

'No one deserves to face this kind of behaviour while doing their job.

'I find it particularly upsetting to hear of the impact these incidents have on the mental health of staff, many of whom were carrying out essential maintenance of our trunk road network during the COVID-19 pandemic.

'The Scottish Government fully supports the efforts to raise awareness of these incidents and the call for action to tackle roadworker abuse. I would also like to thank front line staff for their continued hard work and dedication during the pandemic.'

Iain Murray, BEAR Scotland managing director, said: 'It is totally unacceptable to expect regular verbal abuse that in the past has seeped over into physical abuse in your daily working life. It is not surprising that this survey reveals the wider impact of this on the mental wellbeing of our operatives – whether through being on the receiving end of an irate driver’s ire or the impact of repeated negativity from road users.

'The only way to address this is with a zero tolerance approach. We are continuing to invest in vehicle and body cams which will ensure this behaviour is captured and footage can be used in prosecutions against offenders.'

'Why do people think they can act like that?'

John Willox, a BEAR Scotland operative, explained the impact of a recent incident he experienced.

'I was operating a Stop/Go board at a work site. A car pulled up, the driver got out and verbally abused me aggressively.

'Eventually he got back into his car and then tried to drive around me. He mounted the verge, knocked over the Stop/Go board and actually clipped the side of my body to get past.

'He continued to shout abuse at other members of the team and drove dangerously through the live works area, speeding off before the police arrived. It was lucky no-one was seriously injured. Why do people think they can act like that and put others at risk?.'