Transport Scotland and the companies that operate its trunk road network have launched a roadworker safety campaign, asking drivers to help stamp out the ‘shocking’ levels of abuse suffered by their workers.

BEAR Scotland, along with Scotland TranServ and Amey, have launched the campaign alongside Transport Scotland after a report revealed the abuse and threats their workers had experienced in the last year, including three quarters of workers being verbally abused. 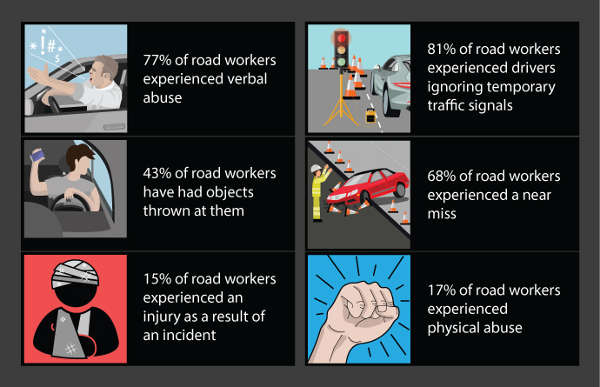 The campaign has gathered support from a number of national motoring and worker safety organisations, including the RAC.

Scotland TranServ, a joint venture between Balfour Beatty and Mouchel that provides management and maintenance services in South West Scotland, found that:

The types of missiles reported as having been thrown from passing vehicles included eggs, bananas, beer cans, bricks and bottles of urine.

Andy Fraser, Scotland TranServ’s operating company representative said: ‘More than two-thirds of our employees work on the trunk roads in the south west of Scotland every day. Their accounts of dangerous driving and the missiles thrown at them are concerning. Our operatives are real people, with real lives and real families; families who want their partners and parents to come home safely at the end of the working day.’

Bear Scotland, which operates in the North West and North East of the country, found that:

Eddie Ross, on behalf of BEAR Scotland covering the North West of Scotland, said: ‘We understand that no one likes being held up at roadworks and we try hard to minimise disruption as much as possible.

'However, the behaviour of a small minority of passing drivers is unacceptable. Ironically, our team during the winter are, quite rightly, considered to be winter heroes for keeping roads safe during snow conditions. At other times, when they are trying to keep roads safe by repairing them, they are subjected to abuse.’