The London Borough of Brent has completed a two-year programme that aimed to rid its roads of potholes and defects using Velocity Patching.

In what Velocity said was the largest ever spray-injection patching project ever undertaken in the capital, the local authority set out to visit every residential street in the borough. 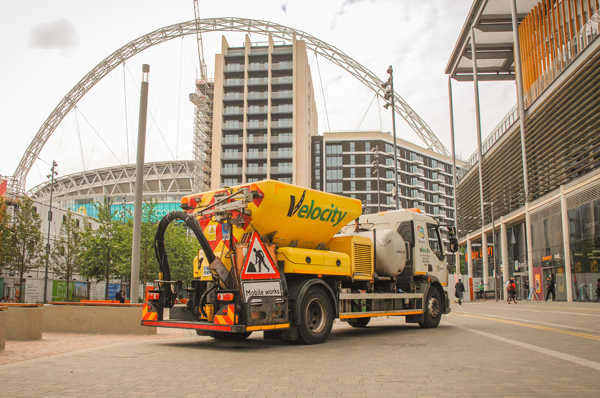 The campaign followed a trial of the technique in 2018 to ensure that spray-injection patching met the demanding needs of the urban network in the borough.

The firm said the council was able to carry out more than 50 repairs per day, compared to around 10-15 with a traditional gang. Over the two-year programme, 35,131 potholes and defects were repaired at an average cost of £24 each, which Velocity said compared to the typical cost to repair a pothole in London of £64.

Taking a preventative approach, whole roads were treated at the same time, fixing defects below the intervention level before they deteriorated further.

Tony Kennedy, Brent Council’s head of highways and infrastructure, said: ‘Like most London boroughs we were experiencing a number of problems with potholes and other defects on our carriageways, particularly during the winter months when the cold weather accelerates deterioration. We decided we had to look at something different, and entered into a two-year contract where the aim was to visit every residential road.

‘Now we are at the end of that project, we’re very pleased to say that thanks to our partnership with Velocity we have achieved that. Velocity have carried out over 35,000 repairs to defects over that time. We have had minimal complaints from residents, and our roads are a lot more capable and durable to withstand cold snaps.

‘The speed of the process is very important to us. A traditional pothole repair normally takes 15-20 minutes, whereas using the Velocity process we are able to do these repairs in an average time of three to five minutes. That has the benefit of opening up the road a lot quicker, reducing congestion and minimising any disruption to residents.

The council’s highways team use Yotta’s Horizons visualised asset management software to plan works, together with data collected during highways inspections, helping to move from reactive to proactive maintenance.

The software provided operational insights to help focus on ‘pothole hotspots’, prioritising repairs based on density and risk and accelerating the speed and efficiency of the work.

As a cold applied treatment with zero waste to landfill, Velocity patching contributed to Brent Council’s commitment to reducing their carbon footprint, the firm said.

The project was delivered by multiple crews and machines working seven days per week. To adapt to the busy urban environment, adjustments were made to the machinery and processes to protect street furniture, verges and vehicles. 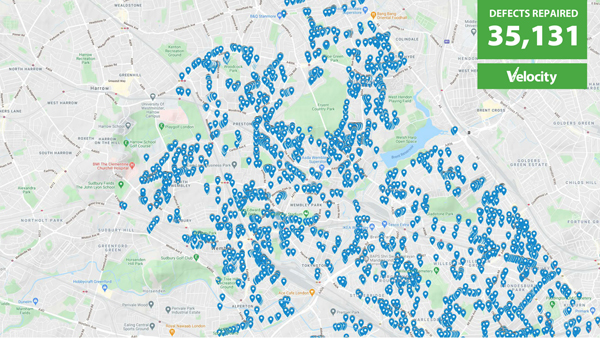 Alastair Smith, Velocity’s customer relationship manager, said: ‘Working in busy urban environments brings challenges, but we have been able to plan and adapt operationally to mitigate them, delivering great value and improving the network.

‘We see this as a great model for other London boroughs, and I’m looking forward to working with local authorities throughout the capital to share the success we have achieved in Brent.’

The council now plans to carry out pre- and post-winter Velocity patching programmes to repair any new defects before further deterioration.