The Government has given the go-ahead for work to start on a major roadbuilding scheme with a £20m contribution from the EU.

Transport secretary Grant Shapps has granted a Development Consent Order for work to start on the A30 Chiverton to Carland Cross Dualling Scheme, which is listed in the 2015-2020 Road Investment Strategy as ‘committed subject to other contributions’. 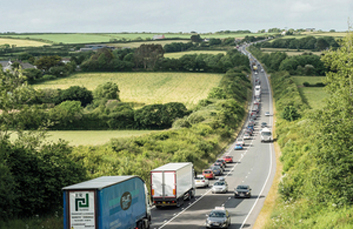 Announcing the go-ahead for the £290m project, Highways England said the cost of developing the scheme is being partly funded by an £8m contribution from the (EU) European Regional Development Fund, with an additional £12m for the construction phase.

The remainder of the cost of developing and delivering the scheme is being funded by central Government.

Roads minister Baroness Vere said: ‘This vital upgrade of the A30 will improve safety, cut congestion, boost access for drivers on their daily commute and create better journeys for the surrounding communities.’

‘It’s the only remaining stretch of single carriageway on the A30 between Camborne and the M5 at Exeter; journeys on this part of the road are regularly delayed, congestion often brings traffic to a standstill, and as a result the Cornish economy is being held back.’

The new route will be build off-line with main construction works scheduled to start later this year and the route expected to be open to traffic in 2023.