Bristol City Council has been forced into developing stronger measures to tackle air pollution, including charging private cars, after it became clear its preferred options ran a serious risk of being unlawful.

The council scrambled to carry out modelling for new options after already launching a public consultation on measures that were were likely to be unlawful as they would have taken nearly a decade to have the desired effect. 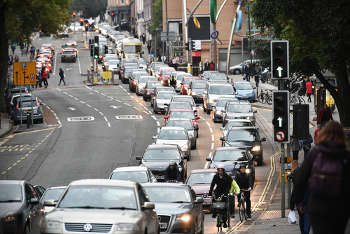 It was taken to task by the Government over the issue as ministers expressed in no uncertain terms it had to consider how to bring air pollution levels back to legal limits in as short a time as possible.

Bristol admitted to Highways it only looked into tougher plans to charge drivers after launching the consultation, while legal experts suggested the authority had barely a legal leg to stand on in defence of its preferred option.

A letter from environment minister Thérèse Coffey to the city’s mayor, Marvin Rees, called on him to consider a ‘class D’ Clean Air Zone (CAZ), which would charge private cars, alongside two options identified by the council, which it has said would not achieve compliance with legal limits until 2028 or 2029.

Dr Coffey wrote: ‘For the avoidance of doubt, I want to be very clear that your preferred option must deliver compliance in your local area in the shortest possible time, and have a robust evidence base to support it.

‘To ensure that compliance is not delayed, I expect your council to model a Class D CAZ with additional measures.’

She added: 'I would like to make clear that any delay or non-compliance with the [Government’s] deadlines will result in me being forced to consider legal action against Bristol City Council which may include issuing proceedings without further notice.’

The council said in June that it would consult the public on two options to tackle pollution: a ‘class C’ CAZ that would exempt private cars or daytime city centre ban on diesel cars – both with extensive additional measures.

It claimed at the time that these option would bring pollution within legal limits quicker than a class D CAZ, which Mr Rees is reluctant to introduce on the grounds that it would disproportionately affect low income households.

Responding to the letter, Bristol mayor Marvin Rees, said the council’s consultants ‘had already been instructed’ to reconsider a Class D CAZ ‘this time adding in the various additional measures proposed in our existing preferred options to see if anything changes’.

He claimed that the council had not previously put forward a Class D CAZ 'because previous modelling work had not indicated that it would help us achieve better air quality sooner than the options we have presented’ but that ‘as part of due diligence it is right that this is looked at again’ with the additional measures.

He added: ‘Any CAZ option which could be taken forward will have technical modelling done to test the social and economic impacts.’

A council spokesperson told Highways that the new modelling 'will have been' ordered in late July.

The council’s consultation began on 1 July and ended on 12 August. Its consultation webpage discloses that technical work had been updated on 2 August and indicated that compliance dates for its preferred options would be be 2029 and 2028, rather than 2025 and 2024 as previously claimed.

This suggests that, rather than being an issue of ‘due dilligence’ as claimed by Mayor Rees, the new modelling was ordered when officials realised that the council’s preferred options would not achieve compliance within an acceptable timescale.

Katie Nield, a lawyer at environmental campaign group ClientEarth, told Transport Network: 'The council’s plan must include all technically feasible measures capable of reducing pollution to within legal limits in the shortest possible time.

‘If there are alternative and/or additional options assessed as being able to clean up the air more quickly than the two options consulted on, the council risks not only confusing the public but also wasting their time by inviting comment on proposals that will not be sufficient to meet legal requirements.’

Ms Nield said that issues such as the impact on disadvantage communities could not be used to prevent action being taken that would bring pollution within legal limits as quickly as possible. She said the courts ‘have been incredibly clear’ that issues such as cost or other issues cannot be used.