Plans for longer and heavier lorries on Britain’s roads may require strengthened lanes designed specifically for HGVs on strategic roads, an industry body has said.

The Department for Transport (DfT) is cutting short a trial of HGVs with trailer lengths from 13.6 to 15.6 metres (17.5 metres and 18.55 metres total vehicle lengths respectively). It plans to consult on allowing the vehicles to operate permanently and is also proposing to increase the current load weight of lorries from 44 to 48 tonnes. 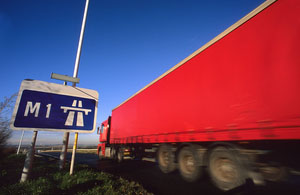 The proposals are aimed at reducing the number of journeys needed to transport goods, and thereby cut CO2 emissions.

Britpave, the British Cementitious Paving Association, said it welcomed any proposal to reduce transport CO2 emissions, but warned that the additional proposed load weight will ‘underline the need for a long-term construction solution for the strategic road network’.

Chairman Joe Quirke said: ‘What is needed is a construction solution that can successfully meet the demands being placed upon it. The way forward is to design specific truck lanes where the road is specifically constructed to meet the demands of heavy traffic loads.'

Mr Quirke said that where the main structural component is concrete and where adequate maintenance has been carried out, pavements have been proven to last beyond their design life and can cope with increased traffic loads.

Mr Quirke said the ‘superior’ whole-life performance of concrete roads should be more widely recognised and considered by the DfT.

He said: ‘In other countries, the whole-life cost of a pavement is considered as paramount and if this is taken into account, together with its CO2 reduction benefits then concrete should definitely be the road ahead for a stronger and greener infrastructure solution.’