As one A14 opens, another closes

Highways England has closed a part of the old A14 in Huntingdon to begin the removal of the viaduct in the town. 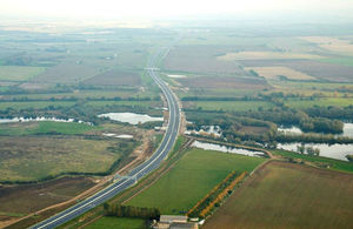 It follows the early opening of the Huntingdon Southern Bypass, which opened on Monday, and is part of the £1.5bn scheme to upgrade 21 miles of the A14 between Cambridge and Huntingdon.

The new road has opened a full year ahead of schedule but as a ‘best-in-class’ A road rather than a motorway as originally planned.

Nevertheless, the design of the three-lane road is the same as an all lane running smart motorway, with no hard shoulder, emergency areas and signs on gantries that can close lanes and show speed limits. Variable speed limits aim to help to manage traffic to reduce congestion and ensure safety.

The gantries are of a new cantilever design that allows them to cross one carriageway with just one base, placing signs above each lane. In October, Highways England chief executive Jim O’Sullivan told the Transport Select Committee: ‘You will have seen that we now use the gantry that comes out and projects on an arm halfway across the motorway, with all the lanes on the same sign.

‘It has a single base as opposed to two bases. There is less steel in it. It is better for the environment. That is the sort of thing that is bringing the cost down.’

Like a motorway, slow moving vehicles will be prohibited from the new bypass and will be directed to use alternative local access roads.

The old A14 has now been closed in both directions between Godmanchester and the Spittals interchanges.

Highways England said this will allow it to start work to remove the existing viaduct over the railway and build new link roads into Huntingdon town centre. This closure will remain in place until 2022.

Work to remove the viaduct (above) will begin work by removing the span that crosses over the East Coast Mainline at Huntingdon train station and Brampton Road Bridge. This will be done in three stages into the new year, after which the spans on either side will be taken down.

Highways England has said removal of the old viaduct will enable a major redesign of the area near the Huntingdon train station (below). 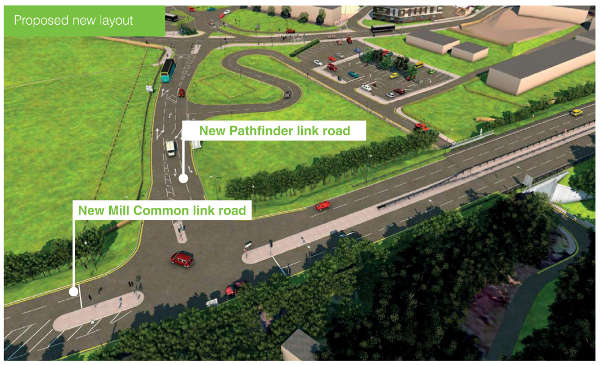 Highways England said drivers who would normally travel (south east) from Huntingdon to Cambridge will now use the westbound A141 (previously the A14 west of Huntingdon) from Spittals roundabout towards Brampton Hut, then access the A1 southbound to join the new A14 eastbound free flow link at Brampton interchange.

Drivers seeking to travel from Cambridge towards Huntingdon will make the same journey, but in the opposite direction.

However, drivers using Google maps complained that the new road was not showing as open, causing the app to recommend inappropriate diversions.

That's great news, but we really need Google Maps to be updated ASAP, as its diverting traffic around Huntingdon as it sees the A14 is closed and does not have the new A14 southern bypass available as a route ?? #A14

Highways England said work on the rest of the project, between Swavesey and Milton, continues and is on schedule to completed as planned by December 2020.