Giant bridge beams are to be lifted into place across the M6 next month as the transformation of Junction 10 reaches a major milestone.

A specialist 50m-high crane will place the 44m-long steel beams that will help form two new bridges over the junction. 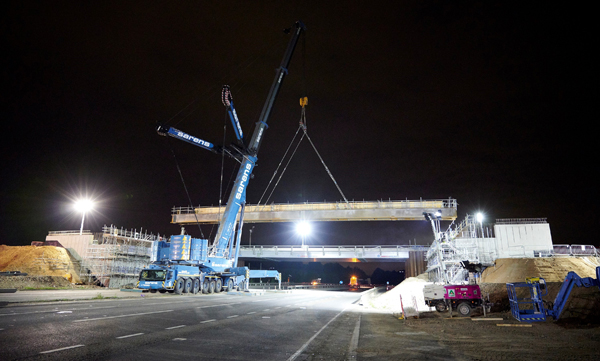 The specialist crane in action

Highways England described the work as a significant step in the £78m transformation of the Walsall junction, which will replace the 50-year-old bridges currently in place across the motorway and double the number of lanes around the bottleneck junction from two to four.

Congestion at the junction was identified as one of the main transport issues facing the region in the West Midlands Strategic Transport Plan.

The government-owned company and Walsall Council, supported by the Black Country Local Enterprise Partnership, are funding the upgrade. John Sisk & Son is carrying out the work.

A team of around 50 workers will be involved as the beams, each weighing 130 tonnes, are delivered as an abnormal load to the site and lifted into place on the north bridge over the weekend of 2-5 July. Both carriageways of the motorway will be closed.

Highways England project manager David Reed said: ‘The improvements to this junction will tackle the congestion that drivers, businesses and the local communities have been encountering for a long time. The beam lift is a huge milestone in the construction of the new bridges but we appreciate that any road closures can be frustrating for people.' 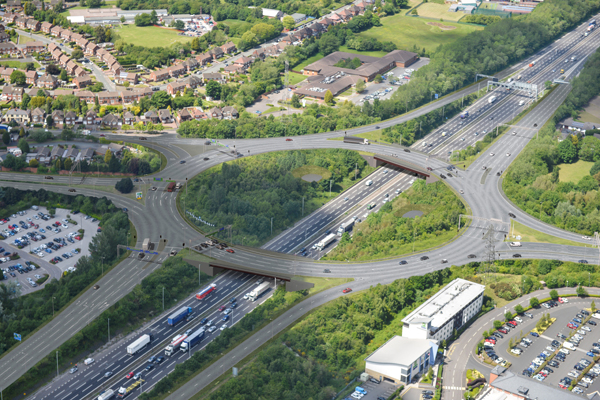 How the junction will look when the project is complete

Adrian Andrew, deputy leader of Walsall Council, said: ‘This is an important milestone in this much needed project. It’s encouraging to see progress being made and I’m sure we’ll all feel the benefit when the work is completed.’

As well as work on the junction, the westbound carriageway of the Black Country Route is being widened from two to three lanes from Junction 10 to Marshlands Way.

The beams for the south bridge will be lifted into place later in the summer and will also require the M6 to be closed. The old bridges will be demolished later in the scheme.