Costain gets digital after second A1 win

Costain has pledged to deploy digital tools to improve productivity after being appointed by Highways England as the delivery partner for a second major upgrade on busy sections of the A1 in the North East.

Having already appointed the firm to design and manage the construction of the A1 Birtley to Coal House scheme, the government-owned company has now awarded Costain the contract for the A1 Morpeth to Ellingham improvement.

The Morpeth to Ellingham project is due to start construction between July and September 2022 and end in 2024/5. Eight miles of the A1 will be upgraded to a dual carriageway between Morpeth and Felton, including construction of a new dual carriageway bypassing the existing A1 between Priests Bridge and Burgham Park.

Between Alnwick and Ellingham a further five miles of the existing A1 will be upgraded to dual carriageway along the existing single carriageway road, while four new compact split-level junctions will be constructed at Highlaws, Fenrother, West Moor and Charlton Mires.

Tim Gamon, regional delivery director for Yorkshire and the North East, said: ‘We’re delighted to be working with Costain and design partner Jacobs on these two major upgrades, both of which will be a massive boost for the region’s economy. They will also increase capacity along the existing carriageway, meaning safer, smoother, more reliable journeys for thousands of people using these sections of the A1 every day.

‘Costain is already helping us deliver the A1 Scotswood to North Brunton project so we know they will bring a wealth of expertise to our latest schemes and we look forward to working with them to progress both for the wider benefit of the region.’ 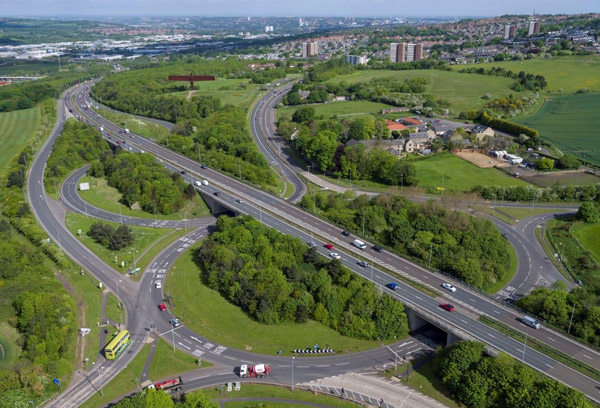 Eighton Lodge (Junction 66) will be modified to accommodate additional lanes

Mal Bell, programme director at Costain, said: ‘These are critical projects supporting economic growth in the North East; improving traffic flow connecting businesses and communities. Costain will deploy digital tools to improve productivity and effectiveness throughout the programme to enable the timely delivery of safer, greener and more efficient roads.’

The £220m A1 Birtley to Coal House project is due to start main construction later this summer and is also due to be complete in 2024/25. Highways England will be widening the carriageway between junction 65 and 67 to add an additional lane in both directions.

The northbound carriageway will increase to three lanes and the southbound to four. Junction improvements will also be made and the Allerdene railway bridge, which is more than 40 years old, will be replaced.