Highways England has confirmed that a new stretch of all lane running smart motorway in the North West will have key safety elements and will follow the recommendations in the Government’s recent stocktake and action plan.

The government-owned company has published its preferred route announcement for the M60 ‘missing link’ scheme at Simister Island near Manchester.

The main aim of the scheme is to provide a direct link between sections of the motorway that are currently linked via a roundabout, creating a complete orbital motorway around the city.

However, the plans also include converting a mile-long stretch between the amended Junction 18 and Junction 17 to a permanent extra lane to provide dedicated lanes for drivers travelling between motorways.

Although this is would create an all lane running scheme of the type Highways England usually describes as a smart motorway, the route announcement brochure avoids using either term.

A continuous stretch from Junction 20 of the M62 through Simister (Junction 18 of both the M62 and the M60) to Junction 8 of the M60 is already categorised as a smart motorway and the M62 section (east of Simister) is already all lane running.

Last year’s stocktake and action plan for smart motorways pledged to install stopped vehicle detection on new all lane running schemes and move towards a spacing of three-quarters of a mile between emergency areas.

The route announcement states: ‘We’ll incorporate the recommendations from the stocktake in our designs wherever appropriate.’

Given this qualification, Highways asked Highways England to clarify whether the new all lane running stretch would have SVD and emergency areas, as well as a concrete central barrier, which is standard for all lane running schemes but not currently present between junctions 18 and 17.

A spokesperson told Highways: ‘Our design for the scheme will include stopped vehicle detection, a concrete central barrier and safe places to stop in line with the requirements for all-lane-running smart motorway schemes.’

The spokesperson added that Highways England would ‘take into account the locations of existing emergency areas and sections of hard shoulder as we develop the plans’.

A published drawing of the new all lane running section includes a ‘proposed refuge area’ on each carriageway approximately halfway along.

The eastbound M62 has an emergency area just east of Simister while the westbound stretch has one just west of Junction 20 and intermittent hard shoulder for several miles.

Highways England is already committed to retrofitting SVD between junctions 18 and 20 of the M62 under the stocktake action plan.

RAC head of roads policy Nicholas Lyes told Highways: 'While increasing capacity for drivers is clearly positive, where the removal of the hard shoulder on a substantial stretch of motorway occurs, Highways England would be advised to incorporate some of the new safety features.

'This should include stopped vehicle detection technology and where appropriate an adequate number of refuge areas to reduce the risk of vehicles stopping in a live lane.' 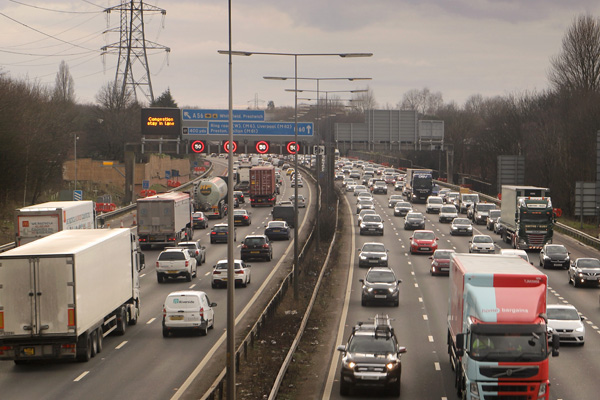 The ‘missing link’ anomaly means eastbound drivers on the M60 have to leave the motorway and use a roundabout to continue on it.

It was created when the M60 was formed 21 years ago, connecting several existing motorways with a new stretch of motorway to form a 36-mile ring road around Manchester.

Highways England said the interchange is one of the busiest motorway junctions in the North-West and is used by around 90,000 vehicles each day – above what it was designed for – ‘and as a result suffers from congestion and poor journey time reliability’.

It said two-thirds of respondents to its consultation backed the Northern Loop proposal, which will allow eastbound traffic that would otherwise end up on the M62 towards Leeds take a slip road and a loop to join the southbound M60.

A significant number of respondents also expressed concern about the conversion of the hard shoulder, something that the route announcement does not mention.

A new two-lane link road will also be created for drivers travelling from the northbound to the westbound stretches of the, replacing the existing single-lane slip road.

Highways England said it will hold another consultation later this year once it has developed detailed designs for the scheme, with a planning application due to be submitted to the Planning Inspectorate next winter. The scheme is a nationally significant infrastructure project.

Subject to this, construction work is due to start by spring 2025.