Highways England has announced details of work to remove the steel barrier on the M20 in Kent that was part of the Government's no-deal Brexit preparations, installed last year under Operation Brock at an estimated cost of £30m.

The removal of the barrier, which starts on Monday (13 January), means that three full-width lanes at the national speed limit will be restored on the London-bound M20 at the end of the month. 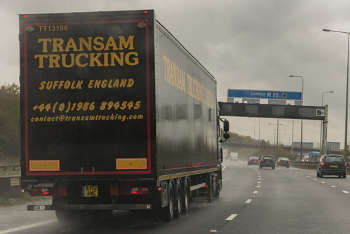 Highways England said the barrier has been in place on a 15-mile section of the M20 between Junctions 8 and 9 since March 2019, reflecting the risk of potential traffic disruption during this period - a reference to the possibility of a no-deal Brexit.

It added that now that the risk has lowered, it has agreed with the Kent Resilience Forum and the Department for Transport that it is ‘the right time’ to take the barrier down.

Highways England was allocated £35m for Operation Brock, the vast majority of which (£30m) was for the development and implementation of the infrastructure for the M20 contraflow. The design costs for the contraflow were approximately £4m with the remaining £26m budget is for its implementation.

Project director Nicky Potts said: ’Removing the Operation Brock barrier is good news for drivers and the people of Kent and reflects the decreased risk of disruption to cross-channel services in the coming months.

‘Operation Brock has provided people living, working and travelling in and around Kent with a scalable set of measures to help limit the impact to the county in the event of disruption to services across the English Channel.

’We are grateful for people’s patience while the barrier has been in place, and are looking forward to restoring the motorway to full capacity.’

The work to remove the barrier will start with a full closure of the M20 in both directions between junctions 9 and 7 from 8pm on Monday until 6am on Tuesday.

From Tuesday, the London-bound carriageway of the motorway will be closed between junctions 9 and 7 from 8pm until 6am every night for a further 15 nights.

Highways England said work is being carefully planned to limit any disruption, with the project being carried out overnight.

The final overnight closure is planned for Tuesday 28 January, where the coastbound carriageway will be closed while the remaining restrictions are removed. All work is expected to be complete, with all restrictions removed, by Saturday 1 February at the latest.