It said this follows the extensive safety investigations carried out by its specialist bridge engineers, who have developed an alternative £8.9m stabilisation programme for the bridge that will save £21m compared to the previous Transport for London (TfL) proposal. 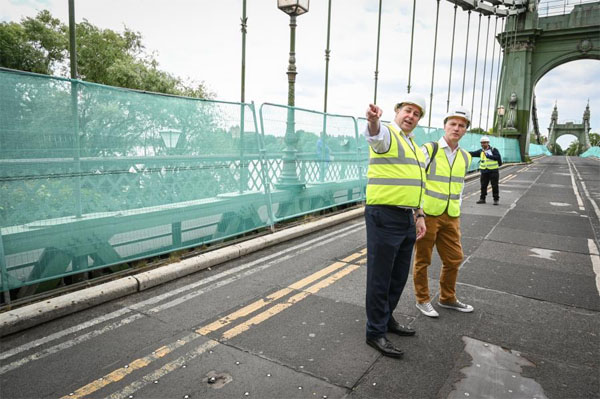 The work is being carried out by the council’s contractor, FM Conway, and its sub-contractors, Freyssinet Ltd and Taziker Industrial Ltd.

They will remove all the casings of the four corner cast-iron pedestals, then fill the pedestals with concrete, install steel frames around them, and jack up elements of the structure to replace the bearings.

The casing removals and jacking operations will be undertaken using cranes positioned on the carriageway at both entrances to the bridge.

The council said the works are necessary to prevent future closures of the 135-year-old Grade II listed bridge to pedestrians, cyclists and river traffic below and will take about nine months to deliver, ‘a considerably shorter period than the previous scheme’.

It added that it is determined to keep the bridge open to pedestrians and cyclists during the stabilisation works and restrict closures to off-peak times. It said the contractors have advised that the access over the bridge will only be interrupted for safety reasons when jacking operations are in progress.

However, the main carriageway section of the bridge will be closed, meaning that cyclists and e-scooter users will have to dismount and share the footways with pedestrians.

The council said that although it is anticipated that the Government and TfL will reimburse the council with their one-third shares, it has approved the spending in full, rather than wait for the cash.

It added that works to re-open the bridge to buses and cars – which will be significantly more expensive – will follow.