Highways England seeks new upgrade for A14 - to Mway status

Highways England is to apply for an 18-mile section of the A14 in Cambridgeshire to be classified as a motorway when its £1.5bn upgrade is complete.

The government-owned company is nearly halfway through the project to improve 21 miles of the A14 between Cambridge and Huntingdon – the biggest road upgrade currently in construction in the UK. 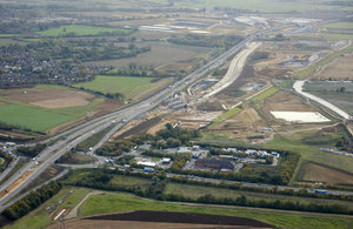 It said the change in status would create an unbroken motorway link between London and Peterborough, as well as increasing safety and improving journeys by encouraging local and long-distance traffic onto ‘the most suitable routes’.

Highways England said the move would give the main section of the A14 upgrade between the M11 and the A1(M) the benefits of a motorway – including variable speed limits.

It also wants motorway status to be extended to a three-mile section of the A1 from Alconbury to Brampton.

Project director David Bray said: ‘We want the A14 upgrade to be the safest and best road it can possibly be, and we now have an opportunity to make our already robust plans even better by putting the right traffic onto the right roads when the new A14 opens to traffic.'

Cllr Ian Bates, chairman of Cambridgeshire County Council’s Economy and Environment Committee’ said: ‘The A14 becoming a motorway will improve connectivity from the M11 to the A1 at Alconbury and will serve Peterborough.

‘The upgrade of this road is vital to boost the local economy and create jobs. Cambridgeshire’s economy is recognised as being able to help kick start the national economy and unblocking the A14 plays an important part in that.’

Highways England said it will ask the Planning Inspectorate later this year to amend the road’s status from trunk road to motorway, in time for the project opening in 2020. The transport secretary will make the final decision next year.

It pointed out that the A14 upgrade already includes new routes for local traffic that will be usable by non-motorway traffic, as well as improvements for pedestrians, cyclists and horse riders.

Construction work on the £1.5bn upgrade to the A14 between Cambridge and Huntingdon started in November 2016. The project includes widening a total of seven miles of the road in each direction (across two sections), a major new bypass south of Huntingdon, widening a three-mile section of the A1, and demolition of a viaduct at Huntingdon.