The UK’s Intelligent Transport Society, ITS (UK), has developed an A-F 'scale of connections for Co-operation of Connected vehicles', to mirror the SAE scale for automated ones.

Developed by ITS (UK)’s Connected and Automated Vehicles Forum, this scale shows that connection and co-operation between existing and future vehicles and roads is very different from automation.

The new scale explains to non-technical readers what services they might expect from a new vehicle or smartphone and highlight that work is still needed to make roads ready for connectivity, even if vehicles and communications are. 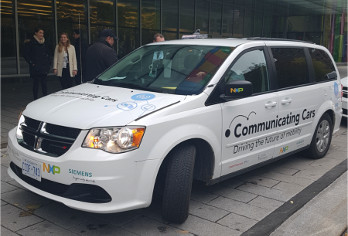 It has deliberately not focused on technology but reflects the 'HD ready' approach that was used for digital TV switchover to help users understand what would be possible without needing to understand the detail.

The scale uses letters instead of numbers as in the SAE scale. Because this scale is customer-focused, a service only reaches that level when widely available (eg an app is published) rather than a demo or research project shows it working.

Andy Graham, chair of the CAV Forum,  said: 'The SAE level is very simple to understand but has nuances, and so will this scale. It also starts in the real world of minimum connectivity with Level A and level B to capture every vehicle today but then looks at short-term connectivity and opportunity, rather than long-term automation.

'It will be reviewed periodically to take account of the rapidly changing landscape. For example, when V2I [vehicle to infrastructure] and V2V [vehicle to vehicle] plans mature, level E may be split further, but currently there are different views re V2V and V2I timing.'

He added: 'Currently all vehicles are at Level A, and with a smartphone can get to C. Level D would take the services many of us work on today in research and demonstrations and make them more widely available and used, as the first step 'connected roads ready' allied to existing communications and vehicles.

'All new vehicles today with connections to head units would be level D but the roads and communications are not yet at the level. This reflects HD TV rollout when HD TVs became available before HD programmes. Level E vehicles are not yet available, but maybe soon.'

ITS (UK) secretary general Jennie Martin added, 'Having a standard scale to explain vehicle connectivity that is as easily understandable as the SAE automation scale is a brilliant idea that will really help people understand where we are with connectivity and how much more can be done. Our CAV Forum has worked hard on agreeing the scale and it underlines again how ITS (UK) is a real thought leader across the transport technology industry.'

Seven Days In ITS