Mace has won a five-year contract to deliver commercial services on two of National Highways’ major projects through its Complex Infrastructure Programme (CIP).

The international construction and consultancy company was appointed to Lot 1 of the £420m National Highways framework for commercial and project management services last year.

It has now been appointed as the CIP commercial partner on both the A428 Black Cat to Caxton Gibbet improvements, and the A303 Amesbury and Berwick Down dualling scheme at Stonehenge.

It will deliver commercial services including cost consultancy and quantity surveying, as well as acting as a liaison between National Highways and its main contractors. 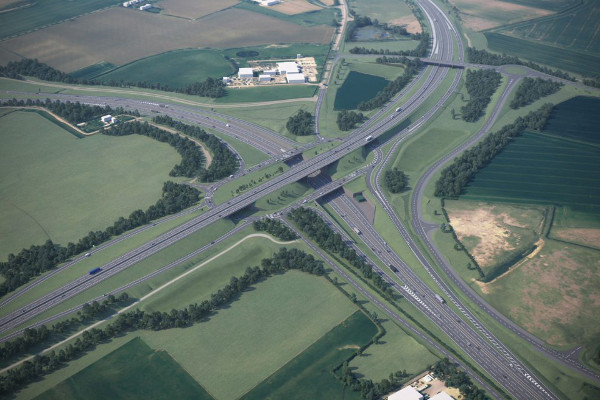 The Black Cat roundabout will become a new triple-decker junction

The A428 Black Cat to Caxton Gibbet improvements will see the construction of a new 10-mile dual carriageway and further junction improvements. National Highways’ application for development consent has completed its examination phase in February.

The A303 Amesbury to Berwick Down scheme will include a tunnel for the A303 at Stonehenge, both of whose portals will be within the World Heritage site.

Question marks remain over the scheme after Grant Shapps’ decision to grant development consent against the advice of the Planning Inspectorate was overturned in the High Court.

Mace Consult CEO Jason Millett said: ‘This is a strategic win for Mace Consult and acknowledges the delivery expertise of our team. Acting as agile partners for National Highways, our key aim is to create better outcomes for our clients and the range of stakeholders on these significant projects.

‘We pride ourselves on delivering distinctive value and challenging conventional thinking in our approaches. As a result, I’m confident that our hands-on approach to both these major infrastructure projects will help improve connectivity in these areas and make a tangible difference to these communities and their funders.’