National Highways has released time-lapse footage showing the ‘methodical and complex work’ of installing giant steel beams for a new £61m flyover on the A46 at Binley, Coventry.

Over two weekends last month, specialist teams used a 750-tonne crane to lift 32 beams - weighing a combined 720 tonnes - into place at the junction, as part of upgrade works. 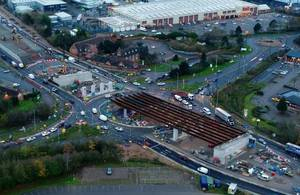 National Highways said the ‘congestion-busting’ works mean that drivers staying on the A46 will not need to slow down for the roundabout, while also improving traffic flows for local businesses nearby.

Project manager Bryan Bradley said: ‘This new time-lapse footage shows the methodical and complex work of putting the beams into place as part of our upgrade at Binley junction.'

Given the scale of the task involved, the beams were lowered into place using specialist equipment.

‘We’re making good progress on the upgrade and once the work is complete, it will alleviate congestion at a well-known bottleneck on the A46.’

The Binley junction scheme also includes improvements to the existing footways for pedestrians and cycle paths. Work started last year and is set to be complete this spring.

The scheme is part of the A46 Coventry junctions upgrade, with National Highways currently developing options for the Walsgrave junction.

It said this month that only one of 11 initial options is now considered viable - a fully grade separated junction approximately 800m north of the existing junction.

National Highways said that this is set to cost between £75m and £125m, with a final cost set to be determined following detailed design work.

A consultation is currently running until 14 February, with a preferred route announcement set to take place in the summer.