Ashworth seeks the calm after the storms 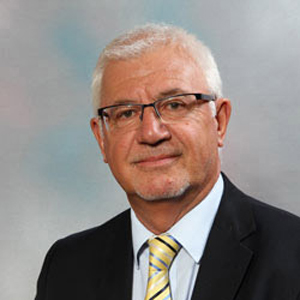 ADEPT stalwart Mike Ashworth is to retire as executive director for economy, transport and environment at Derbyshire County Council.

He has been in his current role since June 2013, overseeing oversees a portfolio that includes regeneration and economic development, transport, countryside, waste, highways, strategic planning, and emergency planning.

Mr Ashworth (pictured) said: ‘Having worked at Derbyshire County Council for 30 years it was a very tough decision for me to decide to retire in September, as I have really enjoyed the work and the excellent working relationships I’ve developed over the years with colleagues and partners.

‘From starting my career as a trainee civil engineer to becoming an executive director, my work has been incredibly varied and I’ve seen and been involved in implementing many changes which I hope have improved the working lives of my colleagues and benefited Derbyshire residents.

‘There are too many highlights to mention, but I’m especially proud of my work supporting ADEPT and all that it has achieved, the involvement by the council in opening a new station at Ilkeston, the successful Markham Vale economic regeneration development, and most recently the introduction to the council’s fleet of its first electric cars.

‘The last 12 months have been some of the most challenging of my career, with Derbyshire being hit especially hard by storms and flooding, including the evacuation of the town of Whaley Bridge when the Toddbrook reservoir dam threatened to fail last summer.

‘However, the coronavirus pandemic has truly tested us all, and I’ve been incredibly proud to lead a department where my staff have worked tirelessly to keep people safe and keep vital services running.’

The council’s deputy leader, Simon Spencer, said: 'Mike has worked tirelessly for Derbyshire County Council for 30 years and in that time he has overseen or been involved in many significant and important projects which have benefited Derbyshire residents and the local economy.

‘He has also ensured that, despite budget challenges and the battering Derbyshire has taken from storms and floods over the last 12 months, the county’s infrastructure is sound and safe, with teams continuing to work hard during the lockdown to fix thousands of potholes while social distancing.

‘Mike’s remit is vast, but so is his knowledge, and he is involved in every aspect of his service, bringing a calm and professional approach to all the challenges the job brings with it. He will be greatly missed by all at Derbyshire County Council and the many partner agencies he has worked so closely with over the years.’

In a message to members, ADEPT president Nigel Riglar wrote: ‘[MIke] has said he will be happy to work with ADEPT in the future, so it might not be a clean getaway!’

Amey makes friends in the north with £180m Area 12 deal

£22,183 - £32,234
The role is to identify maintenance repairs and improvements and to work with Community Groups and Partners, dealing with Cambridgeshire
Recruiter: Cambridgeshire County Council

£49,827 - £52,866 p.a. inc.
An exciting opportunity to help shape transport in the borough has arisen. Brent’s population is growing and with this comes increased pressure on... Brent, London (Greater)
Recruiter: Brent Council