The Department for Transport (DfT) has awarded funding through Innovate UK to a consortium to lead a major UK study on the electrification of long-range lorries using overhead wires on motorways.

The study, which has secured a reported £2m, is part of the £20m put aside for zero emission road freight trials under the DfT’s transport decarbonisation plan.

Under the project, plans will be drawn up to electrify at least 19 miles of the M180, linking Immingham Port with the logistics hubs of Doncaster and its airport.

The consortium plans to take the lessons learned from Europe, and provide technical, economic, and environmental recommendations for installing a proof-of-concept system with a bigger demonstration fleet.

If the designs are accepted and building work is funded the trucks could be on the road by 2024, The Guardian reported.

Costain, which is leading the consortium, pointed out that HGVs currently emit 18% of all road vehicle CO2 emissions, despite only representing 1.2% of the total number of vehicles on the road and 5% of total miles driven.

Sue Kershaw, Costain’s managing director transportation, said: ‘This study is another important step towards understanding how industry could work together to tackle one of the largest carbon emission producers in the country and create a cleaner, greener and more efficient road freight network across the UK.' 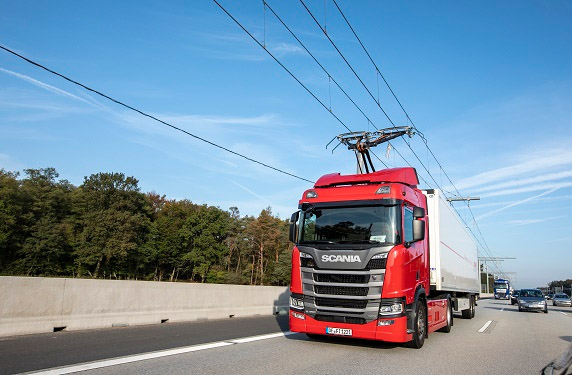 The consortium has proposed an ‘electric road’ system, using the Siemens Mobility ‘eHighway’ technology. The nine-month study begins this month and could be the forerunner of a scheme that aims to see the UK’s major roads served by overhead lines by the 2030s.

eHighways allow specially adapted trucks to attach to the overhead wires and run using the electricity. The trucks have a battery that charges while they are in motion so they can  detach and overtake vehicles and reach their destination without tailpipe emissions.

Siemens Mobility, Scania and SPL have previously trialled smaller electric road systems in Germany and Sweden, with this UK initiative being the first in the world to investigate deploying it at a much larger scale.

Costain said research by the consortium has found that initial investments into new vehicles by operators could be recouped within 18 months, due to lower energy costs, and the electrification infrastructure would pay back investors in 15 years.