Highways England has modified its plans for a road tunnel under Stonehenge as part of its £1.6bn A303 upgrade, however it still faces staunch criticism over the scheme and its mounting costs.

The position of one of the entrances to the tunnel has been moved an extra 50 metres away from the prehistoric monument to avoid ‘important archaeological sites and avoiding intrusion on the view of the setting sun from Stonehenge during the winter solstice’. 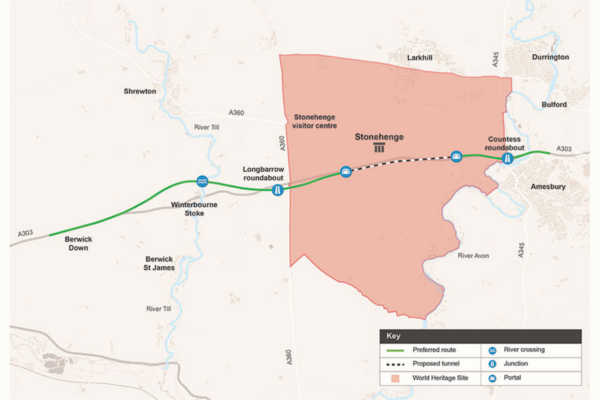 Cost estimates for the scheme have also been changed, increasing by some £200m since the summer to reach £1.6bn.

The route change comes after a consultation period that saw druids, archaeologists, conservation experts and even the UN call for a rethink.

Highways England said that before the consultation there was no clear preferred bypass option for Winterbourne Stoke but the responses ‘have helped us decide that the northern route is the preferred option’.

Highways England chief executive Jim O’Sullivan said: ‘The A303 and the World Heritage site has suffered from congestion for many years. This scheme will enhance, protect and restore tranquillity to one of the UK’s most iconic landscapes.

‘We have listened to feedback from consultation and believe this preferred route will help improve traffic flow, reduce rat-running on the surrounding roads, bringing improvements to local communities and benefits to the south-west economy.’

Linking the M3 in the south-east and the M5 in the south-west, the ‘expressway’ scheme is designed to reconnect the two halves of the 6,500 acre World Heritage site, which is currently split by the road, and remove the sight and sound of traffic from the Stonehenge landscape.

The planned road goes underground before a feature called the Avenue, which is believed to be a ceremonial approach to Stonehenge from the river Avon. This means visitors should, for the first time in decades, be able to follow the route their forebears took.

Campaigners are still adamant the plans have major problems.

The Stonehenge Alliance – supported by Ancient Sacred Landscape Network, Campaign for Better Transport, Campaign to Protect Rural England (CPRE), Friends of the Earth and RESCUE: The British Archaeological Trust – said the project would ’cause severe and permanent damage to the archaeological landscape’.

On behalf of the alliance, Kate Fielden of CPRE and RESCUE said: ‘We are shocked at Highways England’s indifference to UNESCO’s advice. The project needs a complete re-think, not a minor tweak which still threatens major harm to this iconic landscape. The potential risk of loss of Stonehenge’s World Heritage Status casts shame upon our country and those responsible for caring for our heritage.’

In a statement the alliance said: ‘The proposed tunnel would leave some 2.5km of four-lane expressway, substantially in cuttings, well within the WHS with very serious implications for the Mesolithic site of Blick Mead, as well as a number of sites of the Neolithic and Bronze Ages for which the WHS designation was given.’

The Government is committed to upgrading all remaining sections of the A303 between the M3 and M5 to dual carriageway standard, starting with three schemes: one at Stonehenge, one between Sparkford and Ilchester and the third on the A358 between Taunton and Southfields.

A303 Highways on Fridays Stonehenge