Highways England has awarded Skanska a £507m contract to design and build the long-awaited A428 Black Cat to Caxton Gibbet improvements scheme.

Both existing roundabouts will also be upgraded and a new junction added at Cambridge Road, near St Neots.

Lee Galloway, Highways England A428 Black Cat to Caxton Gibbet Improvements interim project director, said: ‘The scheme will transform one of the busiest road links in the East of England, helping to save drivers who live, work and travel in and around Bedfordshire and Cambridge an hour-and-a-half on their journeys every week.

‘We’re extremely excited to be working alongside Skanska as we move through the design stages of this project and onto starting main construction.’

Jonathan Willcock, managing director of Skanska’s Infrastructure business, added: ‘We know the area well and will work closely with communities along the route to help keep the roads running during the works while providing training and job opportunities for local people – helping to deliver a lasting legacy.’ 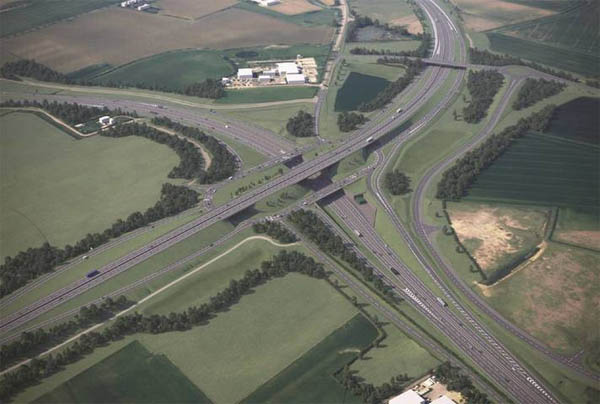 The Black Cat roundabout (pictured) will become a new triple-decker junction, allowing free flowing traffic between the A1 and the new dual carriageway.

Highways England said it will also create better routes for walkers, cyclists and horse riders and improve connections to St Neots and its train station.

Following the contract award announcement, Highways England announced that its proposals for the scheme had been formally accepted by the Planning Inspectorate for examination.

Highways England said the Planning Inspectorate’s examination will help inform the transport secretary’s decision as to whether the project should get planning consent.

Although the news comes after Grant Shapps granted approval for the A303 Stonehenge tunnel against the Inspectorate’s advice.