Tarmac has been awarded a nine-year extension on a highways maintenance contract for a section of the A1(M).

The building materials and construction company was first appointed to the Darrington to Dishforth scheme in 2011 and the new agreement extends the existing contract until 2028.

It will see the Tarmac’s Highway Services business continue to operate and maintain the section of the motorway, which is managed by Road Management Services (Darrington) Limited (RMS) under a 30-year PFI deal, 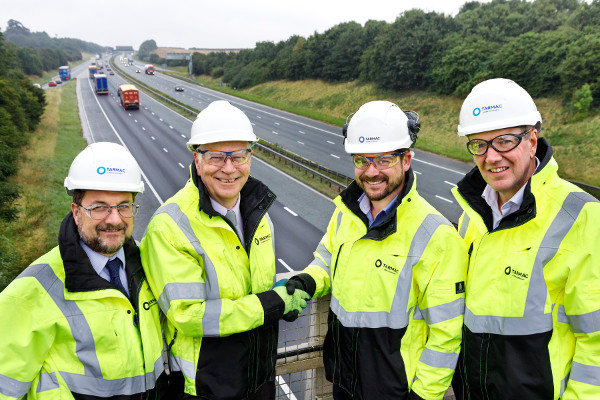 The contract will involve Tarmac continuing to deliver services including maintaining and resurfacing the highway, as well as regular inspections, maintenance of bridges, pavements, drainage, motorway communications and environmental works such as grass cutting and landscaping.

The company will also be responsible for a comprehensive winter maintenance programme, the provision of 24-hour emergency response teams and reactive traffic management services.

A spokesman for Tarmac declined to state the value of the contract.

Peter Hyde, director of Tarmac Highway Services, said: ‘Over the past eight years we’ve developed a very strong and truly collaborative delivery model with RMS and Highways England. Through this approach and our commitment to continual improvement, we’ve been able to deliver cost-effective, first-class highways and maintenance services.

‘Our high levels of health and safety performance together with excellent customer service have played an important role in securing this contract extension. We’re confident that our critical work on this stretch of motorway between Darrington and Dishforth will continue to cut congestion and drive efficiencies with effective highways stewardship.’

Alistair Snart, operations director, RMS, said: 'RMS has enjoyed a strong, collaborative relationship with Tarmac since 2011. This relationship is one built on mutual trust and respect, ensuring maximum value and efficiency are delivered for the project, whilst keeping safety as the number one priority, with the project passing the eight years LTI [lost time injury] free milestone.’