A £100m scheme to improve the 48 riskiest local authority A roads in England will prevent almost 1,450 deaths and serious injuries over the next two decades, safety campaigners have said.

The cash represents the actual spend of the £175m Safer Roads Fund announced in November 2016. In June this year, roads minister Jesse Norman told MPs that this £100m had fully funded all bids from local authorities and that the remaining £75m was not required.

It will be used to undertake a range of re-engineering work, including putting in rumble strips, improving visibility at junctions and protecting or removing trees, poles or lighting columns.

The scheme originally announced 50 roads would be addressed however one council was already doing improving work, while two stretches of road elsewhere were treated as one. 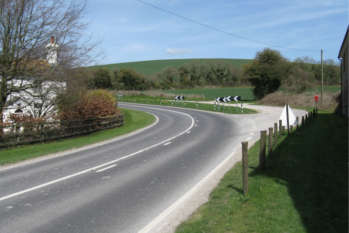 After analysing the schemes, the Road Safety Foundation (RSF) and the RAC Foundation assessed that the total value of the prevention of harm across the 48 schemes, over a 20-year period, will be £550m.

RSF executive director Dr Suzy Charman, who is leading the overall project, said: ‘The dedication of the local authority teams has been truly exceptional, and together these schemes are estimated to save around 1,450 lives and serious injuries throughout their 20-year economic life.

‘Although we have seen reasonable road casualty reductions on British roads over the last two decades, 2017 saw the highest annual death toll since 2011. Finding the right funding mechanisms for safety improvements to our road infrastructure is absolutely essential if we are to break the current plateau in the number of people being killed on our roads. The Safer Roads Fund has given us a truly innovative approach to tackling risky roads.’

Steve Gooding, director of the RAC Foundation, which supported a pathfinder project in advance of the Safer Roads Fund, said: ‘This analysis marks the point at which the schemes have been identified and the money allocated. Now the practical works can start to re-engineer and rehabilitate some of the riskiest roads we have.

‘The real prize from this initiative will be the evidence generated about how effective those schemes turn out to be, and the consequent ability that this will give us, we hope, to proactively and systematically set about lowering the risk profile of our roads more widely.’

The scheme first identified the roads based on safety records but then used a proactive modelling approach to work out how to reduce risk.

Most of the councils submitting proposals to the Department for Transport for cash worked with the RSF to use the International Road Assessment Programme (iRAP) tools to take a proactive risk management approach.

This involved video surveying the roads, coding road features known to relate to crashes and their severity and using iRAP tools to direct the development of treatments.

Highways revealed last year that Highways England used the iRAP methodology to apply a star rating to the entire strategic road network. It has not so far stated which roads fell below the benchmark three star rating or how it intends to use the data to improve safety.

The RSF said the £100m being spend on local roads will achieve: