Calderdale gets help on 'largest project for decades'

John Sisk & Son has been appointed to carry out the construction work on the £27m A629 Phase 1b, Halifax to Huddersfield improvement scheme.

Calderdale Council has also appointed Leeds-based Turner & Townsend to provide construction management support on the scheme, which is the second phase of the upgrade of the main road link between the two West Yorkshire towns.

The A629 Corridor Improvement Project, which is funded by West Yorkshire Combined Authority (WYCA), is based on a strategy to improve multi-modal transport links between Calderdale and Kirklees and is being undertaken in a number of phases.

Phase 1a was completed early in 2019. Phase 1b, which is a Design and Build Contract, commenced in December 2020 and is set to complete in December 2022.

This section of the A629 within Phase 1b carries approximately 20,000 vehicles in each direction on an average day and is the principal route into Halifax from the south and the M62. 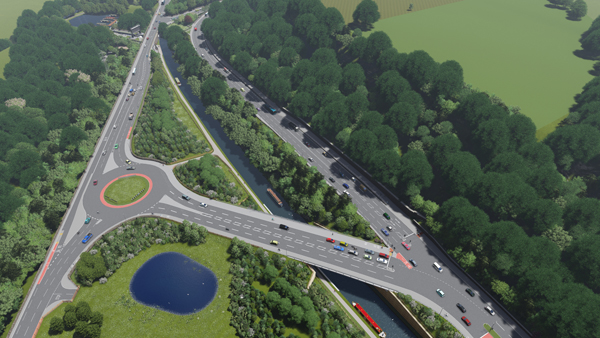 A new signal-controlled junction at the interchange of A629 / Jubilee Road and an improved approach lane will also be introduced, as well as landscaping along Stainland Road and additional access points to the canal towpath.

Sisk has appointed consultants WSP to work on the design elements.

Clare Wood, director, infrastructure Yorkshire and North East at Turner & Townsend, said: ‘The A629 Corridor Improvement Project will enhance transport links between Calderdale and Kirklees, but it also forms part of a wider programme that will have a profound effect on regional connectivity for businesses and communities in West Yorkshire.’

Calderdale Council’s cabinet member for regeneration and strategy, Jane Scullion, said: 'Phase 1b of the A629 project represents the largest civil engineering project Calderdale will have undertaken for several decades. It will see the landscape around the Calder and Hebble junction completely transformed.'

The scheme is being funded by the WYCA’s West Yorkshire-plus Transport Fund, which is part of the £1bn Leeds City Region Growth Deal a package.