County rethinks gritting routes to keep up with risk-based approach

Hertfordshire County Council has approved new gritting routes following a review aimed at bringing its operations into line with the new highways code of practice.

The council said its fleet of 58 gritters will, ‘where practical’, now grit roads to schools, care homes, doctor’s surgeries, key pharmacies and libraries, as well as all the county’s A and B roads, bus routes (including school bus routes), roads with a 10% gradient or steeper and at least one route into every village. 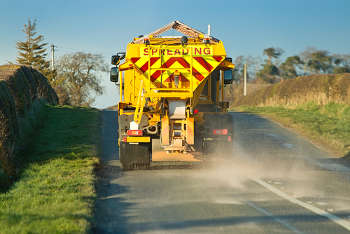 Phil Bibby, cabinet member for highways, said: ‘Last year was a record-breaker for our gritters, which went out 90 times across the winter. While they did a great job of keeping the main roads clear, we had a lot of comments from residents that the roads they really needed to use, for example to get their kids to school, weren’t on the gritting routes.

‘We’ve listened to that, and while we’ll never be able to grit every road in the county, we’ve reviewed which roads our gritters do cover. These changes will help make sure that, for example, schools can stay open and people can still get access to health and social care when it snows.’

A report to the council’s Highways and Environment Cabinet Panel in July stated the 90 precautionary salting runs last winter were 'well above the previous five-year average of 51 and the most runs undertaken in Hertfordshire since records began in 1990’.

It added that to comply with the requirements of the Well-managed Highway Infrastructure (WMHI) code of practice, which it had agreed to adopt by the deadline October 2018, the council had undertaken a review of its precautionary salting network, including developing new criteria.

‘Route optimisation… (basically minimising the number of gritters needed), will be undertaken before the start of the 2018/19 season’.

Although the report states that the council’s 2018/19 operational plan 'reflects the recommendations, where appropriate to Hertfordshire CC, from the National Winter Research Group guidance and WMHI’, the Group has yet to complete an update of its guidance to bring it into line with the new code.

As previously reported, its chair, Chris Cranston, told a meeting earlier this month that parts of the guidance were nearly ready to submit to the UK Roads Board.

The council’s winter service budget for 2018/19 is £3.18m. At the time of publication, it had not responded to an enquiry from Highways regarding its 2017/18 budget or actual spend,