The Government has announced a two-year, first-of-its-kind joint review into roads policing and traffic enforcement will be launched later this year.

Funded by the Department for Transport (DfT) and Highways England, the review will look at 'how roads policing currently works, its effectiveness, and where improvements could be made or gaps bridged'. 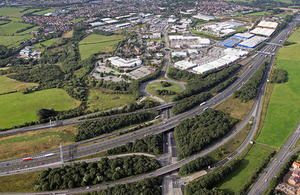 The DfT is working with the Home Office and the National Police Chiefs’ Council as well.

A call for evidence will be launched this autumn with findings and recommendations ready in 2020.

A pilot programme based on the results of the review could begin next year to test out its findings and any new initiatives to help reduce road casualties.

Road safety minister Michael Ellis said: 'We have strong laws in place to ensure people are kept safe on our roads at all times. But roads policing is a key deterrent in stopping drivers breaking the law and risking their and other people’s lives.

'This review will not only highlight where police forces are doing good work, it will show what more can be done to improve road safety.'

The review will look at how the police and different agencies work together, the information they share and how improvements may increase capability and capacity, across all sections of the road network - local and strategic.

The DfT said it did not intend to increase the work burden of the police and to help free up police time, the department has rolled out a new version of the Collision Reporting and Sharing software and provided a smartphone app to work on existing police mobile devices as well as funding to buy tablet computers.

This app enables officers to accurately report crash data and locations on site, rather than having to return to a police station to duplicate paperwork on a computer.

An RAC spokesperson said: 'We welcome the Government's review into roads policing. The RAC's research suggests that there has been a rise in the number of drivers using handheld mobile phones over the last couple of years, despite higher penalties.

'Our research also shows an increase in the number of drivers that admit to driving while over the legal alcohol limit. Our data indicates that people break the law in these ways because they feel they can get away with it which suggests that fewer roads traffic police officers is contributing to illegal activity at the wheel."

'The review should look carefully at numbers but also consider new forms of technology that can help keep our roads and its users safe.'