Speed limits of 20mph are now in force across 8.9km of roads within London’s Congestion Charging Zone.

Transport for London (TfL) described the move as ‘a significant move to reduce road danger across the capital’ following strong public support for its proposals. 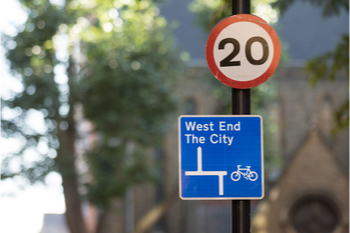 London mayor Sadiq Khan said: 'I am absolutely determined to do everything I can to eradicate all deaths and serious injuries on London's roads and these new measures are a vital step along the way to helping us to achieve this.

'By cutting speed limits on TfL's roads within the Congestion Zone we are saving lives, while at the same time making our streets more appealing for Londoners to walk and cycle around the capital.'

Victoria Lebrec, campaign co-ordinator for RoadPeace, said: 'We see the devastation that speed causes every day, and the few seconds that are saved can lead to a lifetime of misery for a victim.

‘Whilst TfL's plans are encouraging, they represent a small percentage of the roads in London. We would like to see more boroughs adopting a 20mph default speed limit.'

TfL said the 20mph speed limits are supported by new signage and road markings, with raised pedestrian crossings being installed in prominent locations where a high number of people walk, including near Embankment and Tower Hill Underground stations and outside the Tate Britain.

It added that it will recalibrate all the speed cameras in central London and will work closely with the Metropolitan Police to ensure that drivers are complying.

From April, a new speed enforcement team will identify speeding drivers across the capital, including within the new 20mph speed limits.

The team will be deployed to known high-risk locations for speeding, equipped with laser video speed enforcement technology.

Speed is a factor in around 37% of collisions in London where a person dies or is seriously injured.

Figures from 2016, 2017 and 2018 show that 131 people were killed in speed-related collisions on London's streets. A further 2,256 people were reported as seriously injured in collisions where speed was recorded as a contributory factor.