The Queen's speech outlined the Government's plans to reform procurement law and establish the UK Infrastructure Bank in legislation with objectives to support economic growth and the delivery of net zero'. 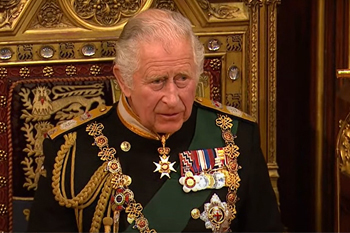 With her majesty the Queen missing the state opening of Parliament for the first time in nearly 60 years due to 'mobility issues', Prince Charles (pictured) read the Government's legislative programme for the coming Parliament.

The Public Procurement Bill will 'enshrine in law the objectives of public procurement including: delivering value for money, maximising public benefit, treating suppliers equally and without discrimination, and acting, and being seen to act, with integrity'.

It will also require buyers to have regard to the Government’s strategic priorities for public procurement as set out in the National Procurement Policy Statement and tackle 'poor performance through new exclusion rules and giving buyers the tools they need to properly take account of a bidder’s past performance'.

Prince Charles said: 'Pubic sector procurement will be simplified to provide new opportunities for small businesses,', in a move cheered by the construction sector.

'Furthermore, we look forward to the publication of a Bill to drive local growth, the UK Government’s ambition to improve transport across the UK, and the establishment of the UK Infrastructure Bank in legislation with a remit to drive levelling up and deliver net zero and a budget of £22bn.

'The UK Government is right to recognise that investment in infrastructure is a key driver of growth in our economy, as well as creating high-quality jobs in all parts of England, Scotland and Wales.'

A new Levelling up and Regeneration Bill will 'provide local leaders with the powers they need to revitalise town centres,' the Government also said.

The legislation will enable local leaders to force landlords to rent out commercial properties, while councils will be given greater powers to take control of buildings for the benefit of their communities, transforming boarded up shops or derelict buildings.

Councils will also be given greater powers to drive regeneration through Compulsory Purchase Orders, which allow acquiring authorities to obtain buildings without needing the consent of the owner for public benefit. This may include acquiring land to build social housing or other regeneration projects.

The Queen's Speech also unveiled plans for a Transport Bill that will create the new Great British Railways body designed to replace Network Rail as the controlling mind of the rail network.

In announcing the Transport Bill, Prince Charles said: 'Her Majesty's Government will improve transport across the UK, delivering safer, cleaner services and enabling more innovation. Legislation will be introduced to modernise rail services and improve reliability for passengers.'

The main elements to the Bill are:

Darren Caplan, chief executive of the Railway Industry Association (RIA) the voice of the UK rail supply community, said: 'With the introduction of rail legislation, RIA has set out five tests for GBR as it is established. These include the need to ensure there is no hiatus in rail work as the restructure takes place, that the new organisation is transparent, open and accessible, and that it supports a sustainable rail supply sector which encourages private investment.'

Elsewhere, the Government intends to introduce an Energy Bill 'to transition to cheaper cleaner energy'.