Scottish Government digs in on A96 with 40km shared path

Transport Scotland has unveiled new proposals for more than 40 km of shared use path on the Hardmuir to Fochabers section of the A96 dualling programme.

The path for cyclists, pedestrians and equestrians will mainly be located in the new road corridor and will integrate with existing active travel facilities. 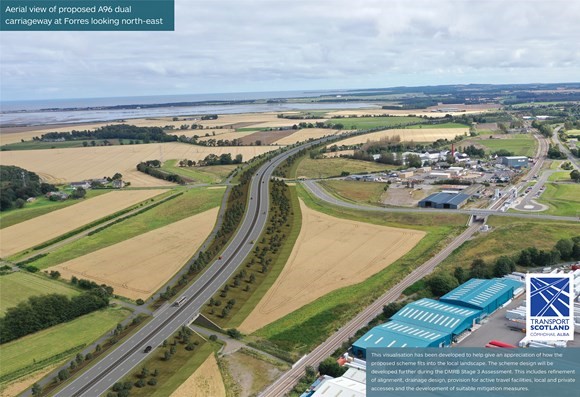 Michael Matheson, cabinet secretary for transport, infrastructure and connectivity, said: ‘The Scottish Government is committed to dualling the A96 between Inverness and Aberdeen, underlining its commitment to connecting Scotland’s cities with a high quality transport system that will generate sustainable economic growth.

‘As well as providing a safer dualled route and bringing savings in journey times for motorists using the route, we are also committed to improving active travel facilities throughout the country. This new, 40 km plus, shared-use path will improve connectivity for many communities along the route between Hardmuir and Fochabers.'

‘In addition, the updated designs for some of the junctions will result in reduced impacts on agricultural land, reduced landscape and visual effects and lower material requirements.

'When completed, the scheme will provide better transport connections in Moray and to the wider transport network, bring relief to communities currently affected by through traffic and save over 20 minutes for road users travelling between Hardmuir and Fochabers.

The announcement follows suggestions that the Scottish Government’s draft National Transport Strategy signals a move away from large road building projects like the £3bn A96 dualling scheme.

However, Transport Scotland said that as a further confirmation of the Government’s commitment to the dualling programme, it had announced its intention to award two contracts to undertake ground investigations as part of the Hardmuir to Fochabers scheme.

The two separate contracts, one for Hardmuir to Cloddach and one for Cloddach to East of Fochabers, each costing £1.2m, are to be awarded to Raeburn Drilling and Geotechnical Ltd.

Subject to completion of a standstill period, work is programmed to start early next year and is expected to last approximately two months, subject to weather conditions.

Mr Matheson said: ‘As well as consideration of the feedback received following the drop-ins this week for the Hardmuir to Fochabers scheme, these investigations will provide the key ground information needed as we work towards publishing draft orders.’