Highways England has further delayed the opening of an all lane running smart motorway scheme to install stopped vehicle detection (SVD) technology on the M27, with the scheme now not due to open until next spring.

The M27 smart motorway scheme stretches 24km (15 miles) from Junction 4 (M3 Interchange) to Junction 11 (Fareham). All links will be upgraded to dual four all-lane running, with the exception of between junctions 7 and 8 where the hard shoulder will be retained.

It was originally due to open in the summer but earlier this year Highways England said it would be delayed until the end of 2021. 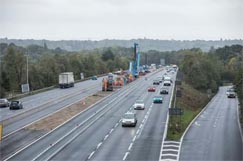 It follows criticism of the government-owned company for not acting promptly to implement a 2016 pledge that SVD would be standard on smart motorways ‘going forward’.

The Government has since said that schemes that are in progress, including those that were not initially designed with SVD, will not open until it is fitted.

A spokesperson for Highways England confirmed that the installation of SVD is the sole reason for the latest delay.

M27 route sponsor John Henderson said: ‘We are making good progress with the upgrade to the M27, and have committed to implementing the recommendations of the Government stocktake before the scheme opens fully. This means it will include stopped vehicle detection technology.

‘We are grateful for everyone’s patience while we complete this work, and we expect the upgrade to be fully open in spring 2022.’