Highways England will close the M27 in both directions between two major intersections this weekend as it replaces the Romsey Road Bridge. 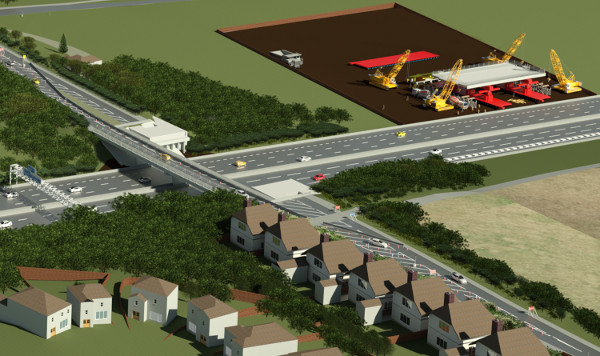 The works will be the first of three weekend closures, with the £19m scheme due to be completed in January 2020. Highways England says the concrete overbridge that carries the A3057 Romsey Road over the M27, which was constructed in the 1970s is now nearing the end of its life.

Due to failings of the bridge bearings, the structure is unable to move as originally designed and developing cracks have been observed in most of the pre-stressed concrete beams at their ends.

Southampton City Council said it expects significant disruption in the city and the surrounding road network as a result of the works next weekend.

It said it has been working with Highways England and other major city organisations to plan and where possible mitigate the impact on essential services.

Cllr Jacqui Rayment, cabinet member for transport and public realm, said: ‘We will be doing what we can locally to minimise the impact of the Highways England motorway closure and to warn people of disruption. We expect significant delays to journey times so please do plan ahead.

‘If you’re travelling to or around Southampton over that weekend make sure you allow extra time for your journey and take public transport, walk or cycle where possible.’

Two further weekend closures of the motorway are scheduled for April and October next year respectively.