Police in southern England detected 305 driving offences in a nine-day operation after officers acquired HGV licences so they could operate a lorry cab on the strategic road network.

Under Operation Tramline, Surrey and Sussex’s Roads Policing Unit (RPU) took to the roads in September and October to carry out a special ‘undercover' operation using an HGV cab loaned by Highways England. 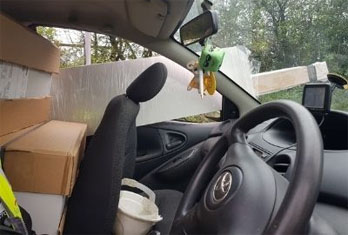 While one officer drove the vehicle, another watched out for and recorded dangerous or distracted driving, relaying details to another police vehicle travelling behind, which intercepted the offender.

Offences included not being in proper control of a vehicle, driving on the hard shoulder, ‘due care’ and seatbelt offences. Interventions included 104 words of advice, 155 Traffic Offence Reports and 23 Fixed Penalty Notices.

Sergeant Kellie-Anne Harris of the newly formed Commercial Vehicle Unit, said: ‘The higher vantage point the HGV cab gives us is incredibly useful when it comes to looking down at what drivers are up to in their vehicles which might otherwise be obscured at ground level.

‘It also allows us to see directly into other HGV or large vehicle cabs which would just not be possible with other vehicles in our fleet.

'Along with 65 uses of a mobile phone, 43 seatbelt offences and 25 speed offences, we saw some truly staggering things like someone using their elbows to steer, a man watching music videos and a woman doing her make up in lane 4 of the M25.

'One gentleman was using his dashboard as his filing system and another driver was transporting DIY equipment unsafely along the M25 (pictured above). The drivers were given words of advice and rectified their mistakes before being allowed to continue their journeys.’

86 offences of not being in proper control of a vehicle were also reported, the majority of which involved drivers interacting with the satnav or maps function on a mobile telephone.

Surrey Police said Operation Tramline will be repeated in the future.