Environmental activists have invited West London residents to imagine the ‘fantastic possibilities that could be in store’ if Hammersmith Bridge remained permanently closed to motor traffic.

The landmark structure was closed to motor traffic three years ago after micro-fractures were discovered in its cast-iron pedestals.

Although stabilisation’ works to make the bridge safe for walking, cycling and river traffic have begun, arguments have continued between Hammersmith and Fulham Council, City Hall and the Government over who should pay the cost of re-opening the bridge to motor traffic.

Campaign group Possible said the bridge was never designed to carry car traffic, and that due its listed status and Victorian construction and materials, ‘it soon became clear this was the most expensive bridge in Britain to fix’. 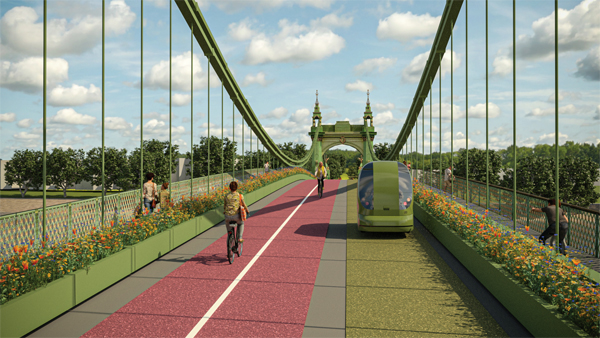 Last weekend Possible held a ‘Bridging the Future’ event in Barnes to highlight ‘the fantastic possibilities that could be in store for West London if Hammersmith Bridge closed to motor traffic for good’.

The group argues that the utility of bridges makes them bottlenecks for motor traffic, exacerbating emissions and traffic, but that allowing bikes, cargo bikes, e-scooters and autonomous pods for those with mobility issues could put communities on both sides of the bridge ‘on the right path to a healthier, climate-friendly future’.

It points out that if London is to meet its net zero targets by 2030, car vehicle kilometres need to be reduced by 27%, arguing that with traffic levels in London not having fallen for 10 years, this target ‘will not be met by doing the same things we have always done’.

The group said that with ‘West London’s traffic woes’ extending beyond Barnes and Hammersmith, it has developed a holistic plan that can sustainably meet residents’ mobility needs.

It added that it will use feedback from the event to inform a proposal it will present to the relevant authorities in the summer ‘as a climate and people-friendly alternative to spending vast sums of public money to invite 25,000 motor vehicles back across the Thames every day’.