Halton Borough Council has insisted it is ‘business as usual’ at the Mersey Gateway despite a tribunal decision that the bridge’s crossing charge is 'not a tolling scheme’.

A Traffic Penalty Tribunal appeal ruling has said that drivers pay a ‘road user charge’ at the Mersey Gateway and not a toll as the council argues. The two are legally different. 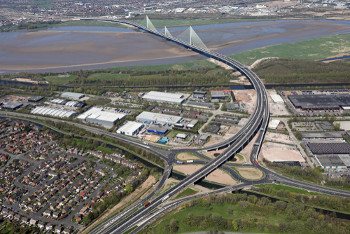 The appeal was brought by Scrap Mersey Tolls campaigner Damian Curzon, who argued there were errors in the wording of two penalty charge notices he received for failing to pay the £2 crossing charge on 15 June 2018.

The tribunal adjudicator M. F. Kennedy concluded that the scheme is a road user charging scheme, not a toll, and the use of the word ‘toll’ on the penalty charge notice was a ‘procedural impropriety’.

The sign on the bridge in question is authorised for a tolling scheme only, Mr Kennedy said.

The fact that the council did not respond to the representations within 56 days means they have been accepted by the authority and the charge should be dropped.

Responding to the decision, a spokesperson for Halton BC said: ‘Adjudication by the Traffic Penalty Tribunal (TPT) cannot and does not, in law, invalidate or remove the powers in place from the 14 October 2017 to administer and enforce tolls on the Mersey Gateway Bridge.’

The TPT’s decision ‘does not have general effect nor carry any weight as precedent,’ the spokesperson continued.

‘Any suggestion that the council has no power to charge or enforce how it does this or that the council is acting inappropriately or “illegally” is misleading, inaccurate and wrong in law,’ they added.

Furthermore, they challenged the Tribunal’s comments with regards to the bridge sign.

‘The Adjudicator’s decision in respect of signage contradicts the decision of the Adjudicator in the early case where the Adjudicator concluded signage is “large, well sited, in clear view, and to communicate to a driver unfamiliar with the area that a payment was required and how to pay.”’