A senior MP has challenged the transport secretary over a select committee request for smart motorway emergency areas (EAs) to be closer together after it emerged a key safety pledge could be watered down.

Highways understands that the Department for Transport is now including other, less safe, places to stop, when it comes to the spacing of EAs on smart motorways.

EAs are effectively laybys that provide a refuge for broken down and other stationary vehicles away from the main carriageway of a motorway, particularly those where the hard shoulder has been converted into a running lane. They are designed to be 4.6 metres wide and a minimum of 100 metres long with an emergency roadside telephone.

In his foreword to the Department for Transport's (DfT) 2020 Stocktake and Action Plan for smart motorways, Grant Shapps described ‘emergency areas…if you can reach one [as] safer places to stop than a hard shoulder’.

The document itself distinguishes between EAs and ‘places to stop in an emergency’ and pledges to reduce the distance between the latter to 3/4 of a mile ‘where feasible’ on future schemes, with a maximum spacing of 1 mile. 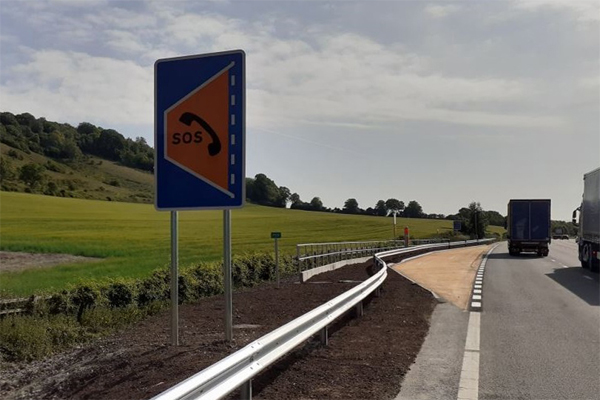 In its report last year, the Transport Select Committee referred specifically to emergency (refuge) areas. It recommended that: ‘The Department and National Highways should retrofit emergency refuge areas to existing all-lane running motorways to make them a maximum of 1,500 metres apart, decreasing to every 1,000 metres (0.75 miles) where physically possible.’

In January the DfT stated that it ‘agrees in principle' with this recommendation.

However, it has now told Highways that its definition of an EA also includes Motorway Service Areas (MSAs) and a new or existing hard shoulder. National Highways has said that it also counts slip roads against the spacing requirement.

Jack Cousens, head of roads policy for the AA, told Highways: ‘Both the department and the committee were clear in what they wanted, but neither side clarified the crucial detail behind the commitment. As such, we now have the two parties openly campaigning against the other to ensure their interpretation is delivered.

‘Installing more emergency refuge areas is a key cornerstone in boosting driver confidence, but the Government will be worried that if it has to back down from its position the retrofit project will cost more than it bargained for.’

The DfT’s response to the committee also stated explicitly: ‘The Stocktake and Action Plan launched a new standard to achieve closer spacing of EAs at 0.75 mile where feasible, up to a maximum of 1 mile. This is now a design requirement for new ALR smart motorways schemes which entered the design phase from November 2020.’

As Highways has reported, National Highways has stated that this ‘refers to places to stop in an emergency [which] could be an EA, slip road [or] service station’.

The DfT also told Highways that it considers (MSAs), and a new or existing hard shoulder to count towards this standard.