Hammersmith Bridge in West London is now closed to pedestrians, cyclists and river traffic after engineers discovered ‘a sudden deterioration in key parts of the suspension structure’.

Hammersmith and Fulham Council said the bridge will remain closed until the engineers are confident that it is safe.

It said the deterioration in the structure was exacerbated by the recent heatwave, which caused cracks to significantly increase despite measures taken to mitigate the heat. 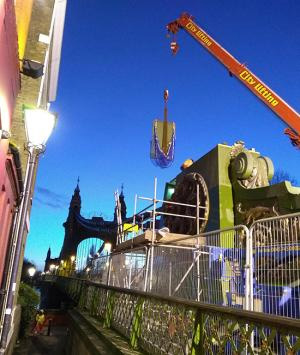 Council leader Stephen Cowan said: ‘Safety is the number one priority. I’m absolutely sure that we averted a catastrophe by closing this 19th century suspension bridge to motor vehicles last year.

‘We have some of the best engineers in the world working on this scheme. They advise we now face a similar dilemma. I appreciate how inconvenient this will be to thousands of people on both sides of the river and I am sorry about that, but we must follow the engineers’ advice which is why the bridge will be closed with immediate effect today.

‘We will update everyone as soon as engineers have investigated the scale of the recent damage. I have instructed them to find a plan to safely reopen it as quickly as they can.’

The bridge was closed to motor traffic last April and the council and Transport for London are struggling to pay for the necessary repairs, which are estimated to cost over £100m.

Pedestrians and cyclists had been allowed to use it in the meantime but now must now cross the river elsewhere, while all river traffic under the bridge will also be stopped, including the pedestrian walkways under the bridge

The council said the reason the bridge is affected by heat is that cast iron can shatter. It added: ‘This is one reason why Hammersmith Bridge is the only bridge of its kind in the country, and one of only two in the world.’