A senior London local politician has said the capital's councils are 'struggling' in their campaign for a share of ringfenced VED cash from 2020 and complained of the 'ridiculous' situation where Tube passengers were subsidising the road network.

Leader of Ealing council and chair of London Councils' Transport and Environment Committee, Julian Bell bemoaned London's loss of about £500m from the National Roads Fund each year, which will be spent on roads outside the capital, and the loss of around £700m a year in Transport for London's grant funding. 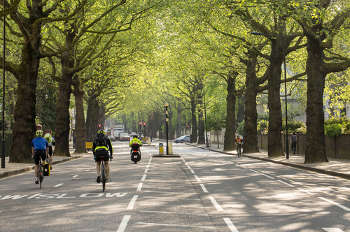 Mr Bell said: 'We actually have, through Transport for London’s budget, Tube riders subsidising car drivers on our roads because of the elimination of that £700m grant to TfL.

'So it seems sensible to us to lobby hard for that £500m VED. Only 10% of Londoners' journeys take place on roads outside the capital.'

Speaking to technical officers from the London Technical Advisers Group (LOTAG), he said: 'I have to say we are struggling. We have not had much encouragement from government but we are due, as London Councils executive, to meet with the London minister [Nick Hurd MP] very shortly and that will be one of the key things that we will raise.

He called on the capital's local authorities to 'give us the data and analysis and we will run a strong evidence-based campaign'.

Mr Bell claimed that a recent £420m pothole fund from the DfT was originally not going to allocate any cash to London before it managed to secure £20m.

London is often left out of cash pots for roads from the DfT, although it enjoys funding through TfL and many argue a disproportionate amount of infrastructure spending through projects such as Crossrail.

Mr Bell said: 'It's a challenge to shift the narrative about it being an us and them, North versus South, London versus the rest. What we have to get people to understand is London is not competing with the north it is competing with Paris, it's competing with New York and other big global cities and it's adding to the national pot in terms of economic growth in terms of jobs and investment.'