National Highways has successfully removed one of two old bridges across the M6 at Junction 10, as part of a £78m upgrade.

Two new bridges, which will each carry four lanes of traffic, are replacing the two-lane bridges that served the junction for 50 years. 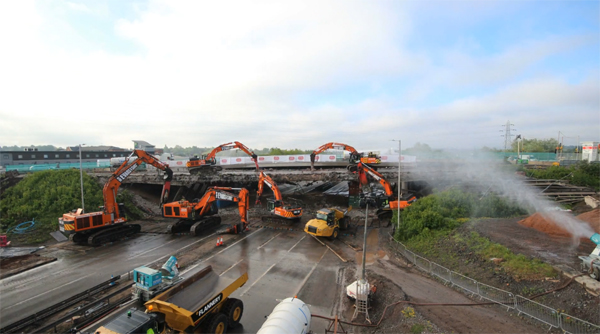 The government-owned company said the old south bridge ‘disappeared in under 48 hours’, with work finishing more than four hours ahead of schedule in the early hours of Monday morning.

Project manager Annie Hyett said: ‘Demolishing a bridge of this size is a complex operation but everything went exactly to plan and we were delighted that we were able to get the motorway open several hours earlier than planned.

‘Road users will soon be able to enjoy the full benefits of the improvements to the junction which will help combat the traffic hold-ups endured at this bottleneck for many years.’

Junction 10 was closed from Friday night until 1.30am on Monday to enable the south bridge to be removed. A fleet of machines swept onto the site to ‘nibble’ away the bridge before the road was cleared and then reopened to traffic.

There was an ‘up and over’ diversion for traffic which left the motorway at Junction 10, travelled over the roundabout and then re-joined the M6 on the other side.

The two new bridges were built alongside the existing ones and the remaining north bridge is due to be demolished within a few weeks.