BT has received what is thought to be one of the highest fines ever for ‘bad road repairs’, which ‘could have had fatal consequences’ according to the courts.

Last month, having admitted the offence under the New Roads and Street Works Act 1991, the telecom firm was fined £30,000 for unsafe road repairs after cables were laid, following a prosecution by Surrey County Council’s highways team. 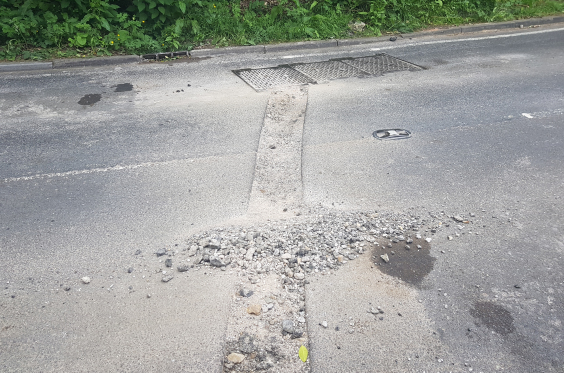 District Judge Teresa Szagun said of the chances of harm, especially for motorbike riders or cyclists: ‘On the one hand the road conditions and weather over this period, which was dry and mild, makes the likelihood of the risk of this low and thankfully something that did not occur. It remains, however, a risk that could have had fatal consequences.’

Cameron McIntosh, the council’s deputy cabinet member for highways, said: ‘We always try to work in partnership with utility firms to ensure high safety standards and minimise disruption – in the same way that we collaborate closely with contractors repairing roads as part of the extra £20m we’re investing.

‘But in cases like this when repairs are so shoddy that lives are put at risk we’re left with no option but to act on behalf of residents even if it seems that in this case BT was let down by someone employed by a contractor.’

According to District Judge Szagun’s judgement, the firm responsible for work on the day in question was Vasmard, a subcontractor for telent, which was itself a subcontractor to Openreach, which in turn is a subcontractor and independent subsidiary of BT - the statutory undertaker. Vasmard has since gone into liquidation.

The work, which involved  laying cables beneath the A24, required Vasmard to reinstate the excavation in accordance with statutory guidance and code of practice. This requires the road to be reinstated to a specified thickness of asphalt (50mm for a temporary cover and 100mm for permanent cover).

After the works, the council was alerted by residents to problems and discovered that the road had been reinstated with a loose granular material across the whole width of the road.

The judge stated that ‘there is a, fairly sharp, bend in the road just at the point of the works, therefore, restricting any view from traffic approaching in either direction, of this uneven surface. No warning signs or protective barriers, cones or temporary traffic light control measures remained in place’.

Vasmard’s explanation was that the individual responsible for the works had left the firm without alerting it to the fact that the job had run out of supplies and just left the job unfinished.

When alerted Vasmard did try to put right as quickly as possible, the judge said.

An Openreach spokesperson said: 'The safety of public is our number one priority whenever we are carrying out work of this nature and it is very clear that, on this occasion, the repairs carried out were not up to our normally high standards.

'Thankfully no harm was caused and we were able to return the road to a safe and acceptable standard within a day of the original work being done. We have since parted company with the contractor that carried out this work on our behalf and have put in place a raft of new preventative measures including further training for our supervisors to prevent this from happening again.'