New data suggests that smart motorway schemes may become more dangerous in the long-term as extra space is taken up by increased traffic.

The only published five-year study of a smart motorway scheme found that collisions rose by a half over five years and so the scheme - on the M6 - had failed to meet its objective of reducing the impact of ‘accidents’.

In each of the last three years of the study, the number of collisions was around 50% higher than the baseline figure. Over the whole period, collisions were an average of 34% higher, a finding that the study describes as ‘statistically significant’.

It adds: 'It is therefore concluded that the increase in the number of collisions is likely to be linked to the scheme.'

The finding was left out of transport secretary Grant Shapps’ much-trumpeted ‘stocktake’ of smart motorway schemes.

The stocktake did include a finding from the M6 Junction 8-10a five-year POPE that there was an increase in the collision rate of 26%. It added: ‘This change was found to be only just statistically significant’.

The document did not state that this finding came from a five-year study.

A DfT spokesperson said: ‘This figure accounts for changes in traffic trends and more directly illustrates the risk to individual road users.’

Based largely on existing reports, including the M6 study, the stocktake concluded that ‘in most ways, smart motorways are as safe as, or safer than, conventional motorways’.

However, it also reveals that of the nine schemes evaluated, three showed a reduction while six showed an increase in the number of people killed and seriously injured.

Despite this, a DfT spokesman confirmed that the stocktake, rather than the evidence behind it, is now the key government policy document. He stated: ‘The stocktake, as a document, provides a sound basis for future decisions about smart motorways.’

RAC head of roads policy Nicholas Lyes told Highways: ‘Our research suggests the majority of drivers believe the removal of the hard shoulder compromises safety in the event of a breakdown.

‘Following the Government’s evidence stocktake, it is vitally important that impact assessments give Highways England the data they need to improve safety on stretches of motorways where collision risk is higher than it should be. The safety of drivers must always be paramount.’

The Five Years After Post Opening Project Evaluation (POPE) of the M6 Junction 8-10a scheme was written in 2017 but was not published by until March of this year, as part of a batch of reports released after the stocktake.

The other studies cited in the stocktake are a mixture of one-year-after POPE reports and three-year safety evaluations, including schemes that at times combine a permanent hard shoulder with ‘smart motorway’ technology, such as the one between Junctions 5 and 7 of the M25.

The M6 report stated: ‘In the five years after opening between junction 8 and 10a, taking into account a national background trend of falling collision numbers, there is an increase in [personal injury] collisions of 34%, which is statistically significant.’ 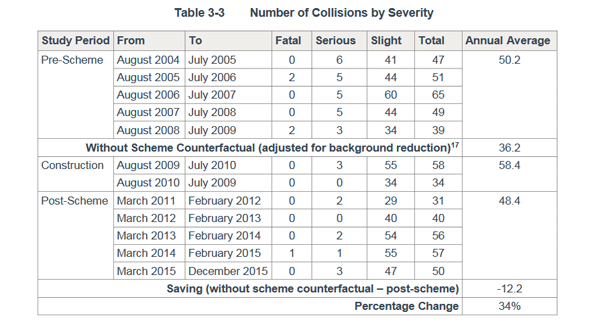 Note: the scheme was completed in February 2011, not July 2009 as the table suggests

During the last three years of the study period, there were 56, 57 and 50 collisions on the area covered by the scheme, with the last figure representing a 10-month period. This compares with a ‘counterfactual’ annual average of 36.2 collisions if the scheme had not been built.

The study for the M6 Junction 8-10a scheme found traffic flow increases between 8 and 13%, concluding: ‘These results suggest that the scheme may have reassigned traffic onto the M6 in some locations.’

These findings show that collisions increased significantly faster than traffic and raise the possibility that the early gains of smart motorway schemes are diminished as extra space is taken up by drivers seeing it as a more attractive option. 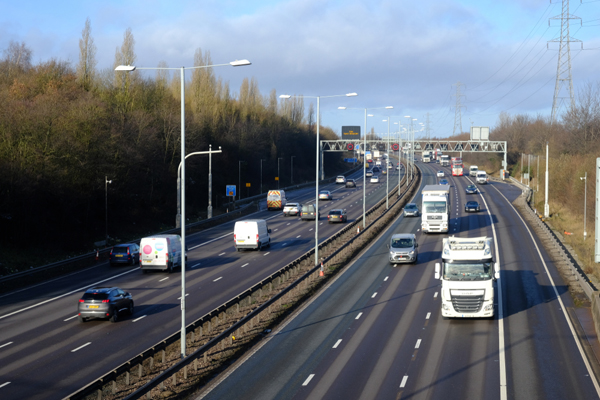 The M6 near Junction 9

Highways England published a one year after POPE study of the M6 Junction 8-10a scheme in April 2014. 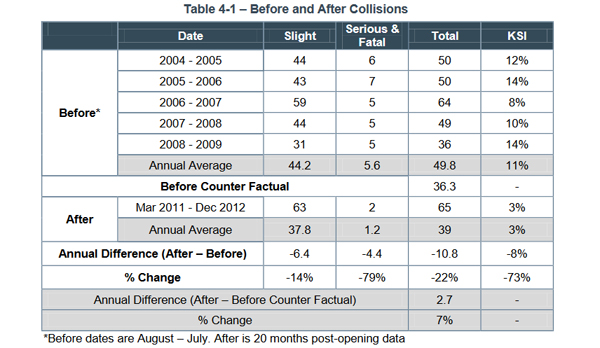 The annual average number of collisions was in fact 35.5 over the first 20 months

The one year after report stated that a reduction in the ratio of killed and seriously injured casualties 'is a clear indication that the scheme is fulfilling its objective with regards to reducing the impact of collisions', but noted that this was based on only 20 months of data.

The five-year study also found that the scheme had a benefit-cost ratio of only 1.3, compared to a forecast of 3.58. It attributed this to both higher than forecast costs and lower than forecast benefits.

The scheme, which opened in March 2011, is a dynamic hard shoulder (DHS) scheme in which the hard shoulder temporarily becomes a running lane when the motorway is busy.

One of the actions from the stocktake’s action plan was to end the use of DHS, by converting the hard shoulder permanently into a traffic lane, supposedly because of the ‘potential to cause confusion’.

However, the target date for this change is the end of March 2025.