Collapsible bollards among the recommendations for M4 bottleneck

Collapsible bollards at a motorway slip road and expanded traffic officer patrols are among the early recommendations of the South East Wales Transport Commission, whose remit is to suggest cheaper solutions to the notorious Newport M4 bottleneck.

Last June the Welsh Government cancelled the proposed £1.6bn M4 Relief Road, a southern bypass of Newport, because of cost and environmental issues.

It sugared the pill by announcing the formation of a commission of experts, chaired by Lord Burns, which would report within a year on a package of alternative measures. An interim report was promised by the end of 2019.

The commission got down to work in October. Its first progress update avoids recommending measures which could pre-judge or negatively affect its final recommendations, which are due around the end of 2020. Its analysis of the M4 congestion near the Brynglas tunnels has, however, enabled it to produce some early suggestions.

The nub of the problem is that the motorway narrows from three lanes to two in each direction at Newport. Widening is not feasible, particularly at the tunnels, but at peak times there are up to 1,500 more vehicles per hour than the maximum traffic volume for free-flow travel. Accidents cause severe congestion, not only on the M4 but also on local roads as through traffic seeks alternative routes through the city. 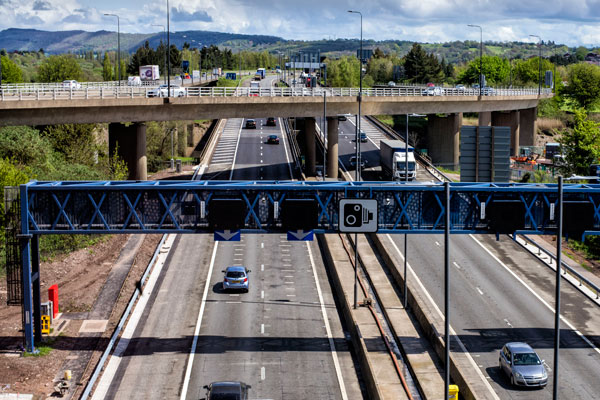 M4 Junction 25a seen from above the eastern portals of the Brynglas tunnels. Photo by the author

Abolition of tolls on the Severn Crossings in December 2018 has probably exacerbated the situation. Estate agents reported a surge of Bristol workers buying property in South Wales, where house prices are cheaper, on the assumption that commuting by car along the M4 would be cheap and easy.

One initial recommendation relates to Junction 25a, near the eastern tunnel portals where three westbound lanes become two. The inside lane becomes the off slip towards the A4042, but many drivers wishing to continue through tunnel wait until almost the last moment to change lanes.

‘Traffic data and modelling demonstrate this measure, when combined with an average speed control of 50mph, should greatly reduce the “ripple” effect of late lane changes, significantly improving flow into the Brynglas tunnels during peak periods,’ says the commission.

‘This should improve journey time reliability through narrowing the distribution of average speeds. Journey times along the road should therefore be more predictable as a result of the measures.’

The commission also identified differential speed limits on the M4 at Newport as a contributor to congestion. The central section has a permanent 50mph limit enforced by average speed cameras, to reduce air pollution. The sections to either side have variable speed limits, ranging between 30mph and 70mph according to conditions at the time.

The commission recommends enforced 50mph throughout, 24 hours a day. ‘A fixed speed limit should encourage vehicles to travel at a more consistent speed, making many journeys quicker and more reliable. A single speed limit should also reduce driver confusion and improve safety,’ it says.

‘Our analysis demonstrates 50mph to be the optimal speed in terms of journey time reliability and journey speeds, also taking account other important factors such as air quality, emissions and noise.’

However, it acknowledges that average speed cameras across the extended 50mph section may not be a fast-track measure, because of the technical and legal constraints to implementing the cameras.

The Welsh Government announced deployment of additional M4 traffic officers at Newport last summer, and the commission recommends expanding the patrols’ area to include the A48 Southern Distributor Road and the A4810 Queensway – principal diversionary routes for M4 traffic.

It suggests setting time targets for traffic officers to reach incidents, including a 10-minute response time during the peaks, backed up by monitoring and performance evaluation.

It also recommends a review to ensure response vehicles carry the best available tools, particularly for moving stranded vehicles onto the hard shoulder. ‘For example, the failure of an electronic handbrake can sometimes mean a car cannot be towed by traditional means. In these circumstances, “gojacks” trolleys could allow the vehicle to be removed safely,’ says the commission.

Stephen Gifford, member of the National Infrastructure Commission for Wales

James Davies, businessman and member of the Welsh Government’s economy and transport ministerial advisory board

Jen Heal, urban planner and co-chair of the Design Commission for Wales